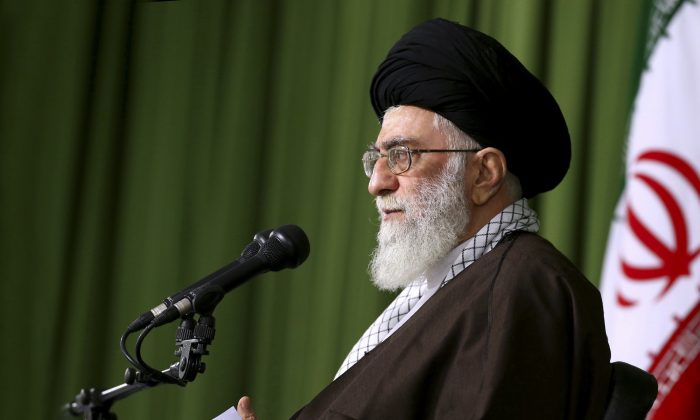 Iran's Supreme Leader Ayatollah Ali Khamenei in a meeting with Foreign Minister Mohammad Javad Zarif and the country's diplomats in Tehran on Nov. 1, 2015. (Office of the Iranian Supreme Leader via AP)
Middle East

Iran Ayatollah: ‘Death to America’ Refers to US Policies

TEHRAN, Iran—The slogan “Death to America” is not aimed at the American people, but rather American policies, Iran’s supreme leader said in comments reported on his official website Tuesday.

Ayatollah Ali Khamenei discussed the slogan while meeting with Iranian students ahead of the anniversary of the takeover of the U.S. Embassy in Tehran on Nov. 4, 1979. Militant students stormed the compound and took 52 Americans hostage for 444 days.

The two countries have had no diplomatic relations since then. However, current President Hassan Rouhani has made efforts to improve relations, including a landmark nuclear agreement reached with world powers this past summer.

Khamenei says the “aim of the slogan is not death to American people. The slogan means death to U.S. policies and arrogance.” The slogan has “strong support” in Iran, he said.

Khamenei and hard-liners in the Iranian government remain deeply suspicious of the United States and view its policies a threat to the country.

He reiterated his warning that the United States is not to be trusted despite the nuclear deal reached with the U.S., Britain, France, Russia, China, and Germany. The agreement promises Tehran relief from crippling economic sanctions in exchange for curbs on its nuclear program.

Khamenei also expressed his apparent belief that the United States “will not hesitate” if given a chance to destroy Iran.

“The nature of the U.S. attitude is continuation of the same hostile aims from the past, and the nation will not forget this,” Khamenei said.

However, anti-American sentiment is rife in Iran. As every year, ahead of the anniversary, the Tehran municipality displays anti-American posters and billboards along the Iranian capital’s main squares and key streets.

One such billboard this year—at Tehran’s Vali-e asr Square—represents a mock-up of the historic and Pulitzer Prize-winning 1945 “Raising the Flag at Iwo Jima” photo by Associated Press photographer Joe Rosenthal, one of the iconic images from World War II. Except in the billboard, the hands of the Marines are stained red from blood and instead of rocks and stones, the U.S. troops are standing on a pile of corpses.