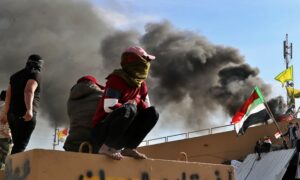 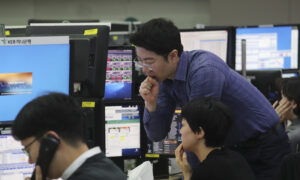 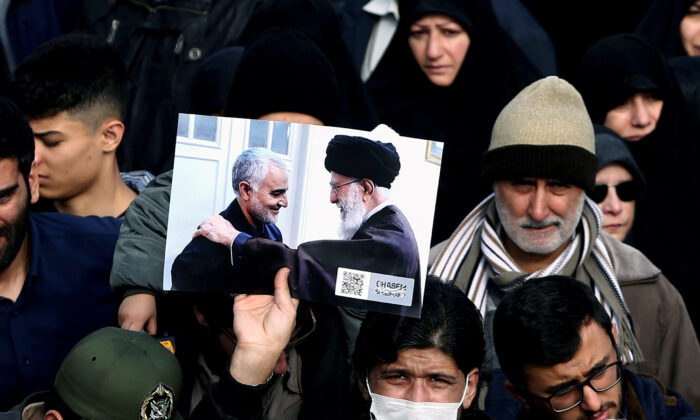 A demonstrator holds a picture of Supreme Leader Ayatollah Ali Khamenei with Iranian Major-General Qassem Soleimani, during protest against the killing of Soleimani, head of the elite Quds Force, and Iraqi militia commander Abu Mahdi al-Muhandis who were killed in an air strike in Baghdad airport, in Tehran, Iran on Jan. 3, 2020. (WANA/Nazanin Tabatabaee via Reuters)
Middle East

Iran’s Supreme Leader Ali Khamenei appointed Qaani less than 12 hours after Soleimani was killed, reported Radio Farda. Khamenei said in a decree that the new commander is “one of the most distinguished Revolutionary Guard commanders.”

“The orders for the (Quds) force remain exactly as they were during the leadership of martyr Soleimani,” Khamenei said in the decree. “I call on the members of the force to be present and cooperate with General Qaani and wish him divine prosperity, acceptance, and guidance.”

Qaani, a top aide to Soleimani, fought in the Iran-Iraq war and was an intelligence official in the corps.

He’s known for his hardline stance against Israel and played a key role in Iran’s involvement in the Syrian civil war, Radio Farda reported. A picture of Qaani wasn’t immediately available.

Qaani was described in a 2012 American Enterprise Institute profile, positing his possible ascension to commander as “uncharismatic and a less distinguished military commander than Suleimani, but his operational battlefield experience, network within the IRGC, and long history of acquaintance with Supreme Leader Ali Khamenei qualify him for such an appointment.”

The profile, utilizing open-source Persian material, described Qaani as a stilted speaker who “hides behind official rhetoric,” in contrast to Suoleimani, who was direct in his speeches could move those who he spoke with.

Areas that could see a change if Qaani became commander, author Ali Alfoneh wrote, were Afghanistan, Pakistan, and central Asia.

“Decision makers planning U.S. military withdrawal from Afghanistan can safely assume that an IRGC QF led by Qaani would engage much more aggressively in Afghanistan and central Asia,” he wrote.

The United States said it carried out the strike that killed Soleimani early Jan. 3. The Department of Defense said that Soleimani “was actively developing plans to attack American diplomats and service members in Iraq and throughout the region.”

“General Soleimani and his Quds Force were responsible for the deaths of hundreds of American and coalition service members and the wounding of thousands more. He had orchestrated attacks on coalition bases in Iraq over the last several months—including the attack on December 27th—culminating in the death and wounding of additional American and Iraqi personnel,” it stated. “General Soleimani also approved the attacks on the U.S. Embassy in Baghdad that took place this week.”

Khamenei, Iran’s leader, said that Iran would take revenge after the killing.

“A severe revenge awaits the criminals who have stained their hands with his & the other martyrs’ blood last night,” he said in a statement on Twitter.