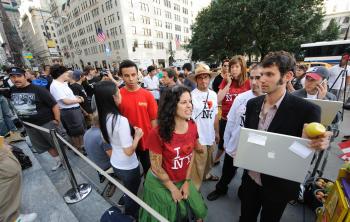 Customers wait outside the Apple store on Fifth Avenue in New York last Friday. About 1,000 tech fans — and at least one confessed `gadget freak` — jostled for a chance to snap up the first iPhone 3Gs. (DON EMMERT/AFP/Getty Images )
US

Internet in your Pocket — The Latest Must-have

It has been an unprecedented few weeks in the Canadian cellular market.

The iPhone has finally arrived in Canada with an array of plan options, Bell and Telus have just announced new incoming text message charges, and there will be three new carriers vying for cellular customers by 2010.

Cell phones have become a fashion item, a personal statement, a lifeline, a business tool, an entertainment conduit — a must-have 24/7 accessory. An estimated 50 per cent of the world’s population now uses mobile phones. This has grown rapidly from just 12 per cent in the year 2000.

So why the hype around the iPhone? Its introduction heralds the beginning of a new era in mobile communications. Though referred to as a phone, it is much more.

The iPhone is an Internet connected portable computer with a revolutionary user interface. It portends the mass market emergence of the mobile Internet – the Internet in your pocket. As a platform, it is as revolutionary as the first IBM PC with DOS.

Just as during the early days of the personal computer, there have been other smart phones on the market for several years. The iPhone however arrives with the ecosystem elements to drive the smart phone into the everyday lives of consumers.

From an ecosystem perspective, the iPhone combines an attractive piece of hardware with an elegant, innovative, and class-leading user interface. With Safari, it has by far the best mobile Internet browser. With the unique iPhone App Store, it is the easiest way for consumers to discover, purchase, and install software on a mobile phone.

This is evident in the 10 million downloads from the App Store in the release weekend alone of the 3G iPhone. According to Apple, there are now more than 800 native iPhone applications available via the App Store, with 200 of them offered free of charge.

The completeness of the developer kit and the focus on creating an easy take-to-market, transaction, and billing and collection capability for developers will ensure that iPhone functionality grows tremendously as software developers create innovative new programs, ultimately leading to further consumer adoption.

So what does this mean to the end consumer? When the first cell phone went on sale in Canada on July 1, 1985, it was seen as a specialized niche business tool rather than the must-have mass market accessory it has become. Certainly, most did not expect to be personally paying around $60 per month in 2008 for this new cellular service.

In the same way that the cell phone and home high speed Internet have become integral necessities of life for many, the mobile Internet will become an integral part of the lives of the majority of Canadians in the next 5-10 years. Whether it is an iPhone or a competitor device, many of us will simply not be able to leave home without it.

Having all of the world’s information available at all times — the Internet in your pocket — will become an indispensible part of everyday life. And of course, plan to budget an additional $30 to $50 per month to feed this habit.