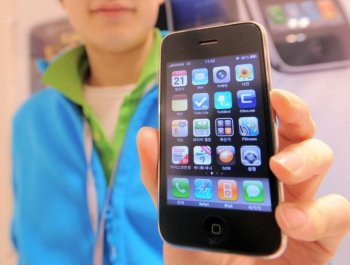 Apple's iPhone of the week is an app called 1Password Pro. The iphone app manages the secrets you have for virtually everything, from logins and passwords to websites, even things for the real world. (Park Ji-Hwan/Getty Images)
News

Tan Truong
View profile
Follow
biggersmaller
Print
Apple iPhone app Type n Talk is a fun little app that does what its namesake suggests—you type and it talks. Its name is an homage to the Speak ‘n Spell, the talking educational toy from the 1980s. In fact, when the app launches, it plays the startup sound of the Speak ‘n Spell.

The voice in the app is also as robotic as the Speak ‘n Spell, although it is much more intelligible. If this were a serious and paid app, the voice quality probably would not be acceptable to most people. But since this app is just for fun, the quality is just fine and it is able to pronounce most standard English words.

It has a decent-sized dictionary so it can correctly pronounce words such as Arkansas, nuclear, and receipt. But it did mispronounce “fromage” like it rhymed with “homage,” and it tripped over “phlegm.”

The current version has a bug which prevents it from pronouncing the “tr” sound. On the whole though, its dictionary is fairly comprehensive and can be used as an educational tool, but it’s not good enough to be a reference.

For most people, this app would probably just be used for fun and practical jokes. The amount of fun you have will probably be inversely proportional to your age. In terms of minutes, that’s probably equivalent to one minute if you’re forty years old and fifteen minutes if you’re five years old.

For less frivolous purposes, this app could be useful if you have laryngitis or if you want to paste in a short article and have it read it back to you while you do other things. But if you were serious, there are much better apps in the App Store for that. Some of them have much higher quality voices and more fully developed text-to-speech functions. There is even an app called iBaldi that has an animated head that has realistic and accurate lip and mouth movements.

Surprisingly, Type n Talk has been downloaded almost three million times already and is currently one of the Featured New apps in the App Store.