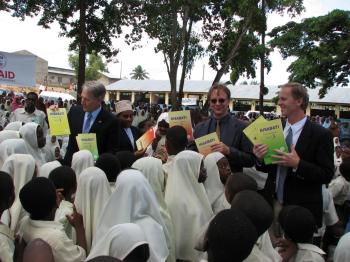 An iPhone app will soon be available that wards off degrading vision through brain training, and could allow older people to use their reading glasses less.

Researchers at Tel Aviv University (TAU) in Israel developed the system to target age-related vision degradation, which reduces the eyes’ ability to focus.

Called GlassesOff, the system works by teaching the brain to compensate for vision deterioration, and will be released in 2012 as an iPhone app.

Over time, the lens in the human eye becomes less supple, which affects its ability to focus on close-range objects, making things appear blurry. The condition, known as presbyopia, is accompanied by symptoms such as tired eyes and headaches, and typically affects people in their fifties and older.

GlassesOff reduces the need for reading aids by training the brain to process the resultant blurred images, effectively to “use the brain itself as glasses,” according to lead researcher Uri Polat at TAU in a press release.

In trials, users aged 51 on average could read two lines lower on an eye-test chart after 40 uses of the app.

These volunteers also demonstrated increased reading speed of 4 seconds per sentence–about a 66 per cent improvement over the pre-training performance, according to New Scientist. “Every single change is in the brain,” Polat told the magazine.

The software teaches users to detect fuzzy patterns called Gabor patches. First, the user has to fix their vision on a white circle, followed by a sequence of images that changes every 60 to 120 milliseconds. The sequence consists of images that are either blank or show Gabor patches in different locations, one appearing where the initial white circle was.

Then, users have to identify at which point in the sequence the Gabor pattern appears at the location of the initial white circle. The software adapts the sequence speed, pattern positioning, and orientation as the user progresses.

The application will be released on iPhone next year with an approximate cost of $95 for the first three months, after which a small undetermined monthly fee will be required for ongoing use