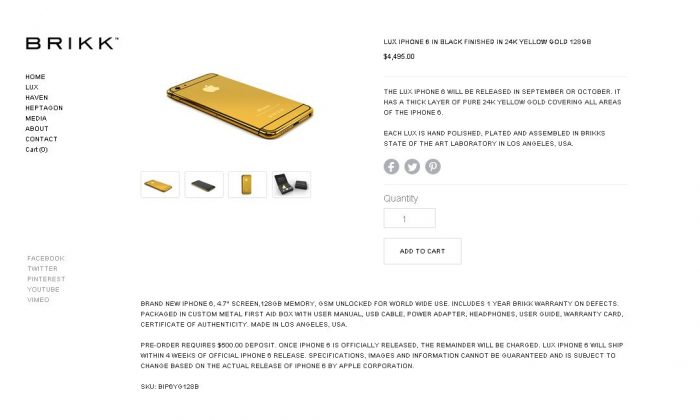 The iPhone 6 will be released in the fall, but consumers can order a 24-carat gold or platinum coated one through a luxury retailer.

Brikk has a listing for the iPhone 6 for a price of $4,500 to $8,795. Platinum, gold, and diamond encrusted iPhones are available through the company’s website.

The post comes as rumors are indicating the iPhone 6 will be launched Oct. 14. Previous reports said the phone would come out in September.

MacRumors, which cites an unnamed source, that the Oct. 14 release date will happen because it will be an “immense” day for Apple.

“Apple launching the iPhone 6 on a Tuesday would be a change from past years, as the company has launched previous iPhones and most new hardware on a Friday. However, the source claims that high customer demand and an ample supply due to a large production effort will motivate Apple to start iPhone 6 sales earlier in the week,” the site notes.

It’s also not clear if the October release for the next-gen smartphone includes the rumored 4.7-inch and 5.5-inch versions. It could be possible that the larger variant is released in 2015.

“Since the first iPhone debuted in 2007, however, every model has hit store shelves on a Friday save for the iPhone 4, which was released on Thursday, June 24, 2010. Further, the supposed month-long wait between the reported iPhone 6 announcement and sale date is questionable, as Apple usually releases iPhone models one week after a reveal. It also goes against the source’s claims of plentiful handset supply,” Apple Insider notes.

The Associated Press top iOS apps for the week: