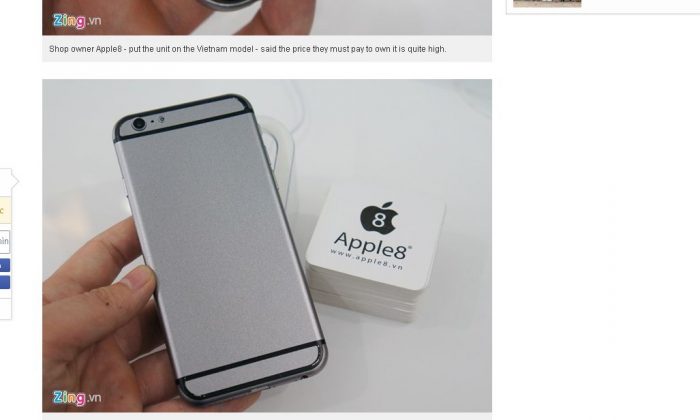 Images of the phone were published on Zing.vn, which says that the “model design matches perfectly with the leaked images earlier on foreign websites,” according to a translation. (Zing.vn screenshot)
Tech

An alleged iPhone 6 dummy has appeared in Vietnam amid reports that the newest Apple smartphone could be coming out a month earlier.

The dummy was reportedly found at local retailer Apple8.

Images of the phone were published on Zing.vn, which says that the “model design matches perfectly with the leaked images earlier on foreign websites,” according to a translation.

“Although it’s only a model, the design of the machine is nearly complete, with a shell made out of aluminum, and complete with,” it says, adding that the device “feels very light and thin” when held.

Last week, Reuters reported that the iPhone 6 would be coming out a month earlier in August.

Apple’s pending purchase of headphone maker and streaming music company Beats Electronics for $3.2 billion is just the latest example of Cook’s deviation from Jobs, who had so much confidence in his company’s innovative powers that he saw little sense in spending large amounts of money on acquisitions.

Cook became chief executive in late August 2011, roughly six weeks before Jobs died. But in a number of ways, he is just beginning to put his own imprint on Apple. Cook is straying from Jobs’ cash-hoarding habits by committing to return $130 billion to shareholders through dividends and stock buybacks. He has orchestrated a company stock split and agreed to match employees’ charitable contributions up to $10,000 annually.

Under Cook’s leadership, Apple also has displayed more social responsibility by working to improve labor conditions in the overseas factories that assemble its devices and taking steps to reduce pollution caused by its data centers and gadgets.

The shift in management philosophy has resulted in an odd twist: Apple Inc.’s pace of innovation has slowed and it now looks more like a conventional company than the corporate rebel Jobs tried to cultivate. Instead of releasing revolutionary gadgets such as the iPod, iPhone and iPad, Apple has been mostly upgrading existing products and figuring out ways to manage its bulging bank account since Cook took over.

“Jobs wanted Cook to step out and be different,” says longtime technology analyst Rob Enderle. “But I think he wanted (Cook) to do the things that were central to the business, not things that Jobs thought were stupid.”

Cook has repeatedly sought to assure investors and customers that Apple remains focused on inventing “insanely great” products, even though the company’s last breakthrough, the iPad, came out in April 2010 — 18 months before Jobs died of cancer.

In the meantime, a host of technology companies have forged ahead with wearable devices, including Google Glass and Samsung’s line of Gear smartwatches. Also stealing the innovation spotlight: Internet connected housewares and appliances like the Nest thermostat, whose maker was founded by former Apple designer, Tony Fadell. Google purchased Nest for $3.2 billion in January.

After pointing out that there were other digital music players, smartphones and tablet computers before Apple redefined those markets with its devices, Cook said something that sounded like an echo of Jobs: “It means much more to us to get it right than to be first.”

Wall Street is still taking a wait-and-see attitude with Cook. Apple’s stock ended last week at $585.24, well below its peak of $705.07 reached in September 2012, but still a 56 percent gain since Cook became CEO. That’s just slightly behind the 60 percent increase in the Standard & Poor’s 500 index during the same period. Despite the lag, Apple’s market value is the highest in the world at about $500 billion.

Although Cook has given few clues about the breakthrough products Apple is working on, recent industry speculation has focused on the possibility of an Internet-connected watch, a suite of mobile applications for managing personal health, a digital wallet and a system that would make it easier to toggle between traditional television and Internet video programs. A new iPhone with a larger display screen is also expected in August or September.

“We have not seen any dramatic product changes to suggest Apple has evolved a lot from where it was three to five years ago, but it sure feels like the company is pregnant and we will soon know a lot more,” says Forrester Research analyst Frank Gillett. “If a Beats acquisition is the biggest news of the year, then it will be a bust.”

Neither Apple nor Beats Electronics have commented on reports citing unnamed people who say the two companies are nearing a deal that could be announced as early as this week.

Beats Electronics, founded by hip-hop artist Dr. Dre and music executive Jimmy Iovine, would give Apple a line of trendy headphones and audio equipment that is particularly popular among young adults and teenagers. Apple also would gain a music-streaming subscription service that Beats launched earlier this year.

Apple’s own streaming music service hasn’t gained as much traction as the company expected and says Erick Joachimsthaler, founder and CEO of Vivaldi Partners Group: “If you look at the current music market, downloads are declining for iTunes. So Apple needed to do something.”

With $150 billion in cash, Apple can easily afford to buy Beats. Still, some analysts are puzzled as to why Apple would bother buying Beats when it already owns iTunes and could easily license technology to make even better headphones on its own.

In last month’s conference call, Cook acknowledged to being “on the prowl” for acquisitions.

“We look for companies that have great people and great technology and that fit culturally and we don’t have a rule that says we can’t spend a lot or whatever,” he said. “We’ll spend what we think is a fair price.”

The Beats deal looks like a distress signal to Yukari Iwatani Kane, the author of a new book called “Haunted Empire” that explores how Apple has changed since Jobs’ death.

“When companies start expanding their accessory line-up, it’s a worrisome sign for innovation,” Kane says. “Accessories have always been an easy way for any company to beef up their sales.”

Concerns about Apple’s innovation drought have been heightened by Cook’s management style.

Although he has always been a highly respected executive, Cook focused on managing Apple’s product inventory and component needs before he had to start filling in for Jobs during the periodic leaves he took while battling cancer in the final seven years of his life.

Cook’s adroit handling of the more tedious side of Apple’s business proved to be an ideal complement for the visionary Jobs, who preferred to pour his energy into conceiving new devices and then driving Apple’s engineering team to build them to his exacting standards.

Cook is “the guy who liked doing everything that Steve Jobs hated to do,” Enderle says. “When you make Jobs’ polar opposite the CEO, it’s probably not going to work out well.”