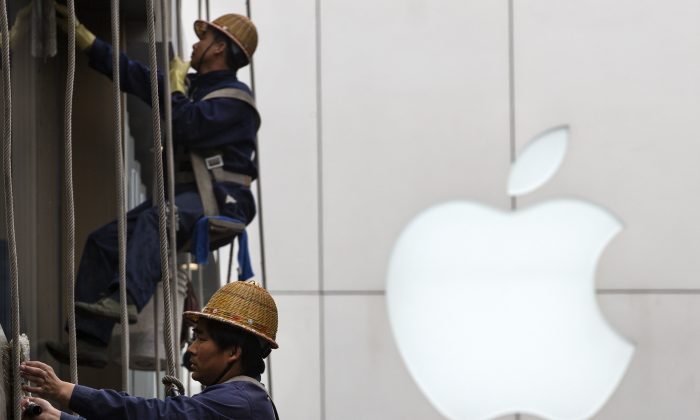 In this April 10, 2014 photo, workers clean windows near Apple's retail store in Beijing, China. An Apple supplier in China is violating safety and pay rules despite the computer giant’s promises to improve conditions, two activist groups said Thursday, Sept. 4, 2014, ahead of the release of the iPhone 6. (AP Photo/Andy Wong)
Tech

iPhone 6 Release Date, Features, and Specs: Did a Chinese Carrier Leak Details for the Phone?

The details of the iPhone 6, likely slated for release this month, may have been posted onto a Chinese carrier website.

According to ZDNet, China Telecom has specs that include “an upgraded 3 megapixel front camera,” a “better touch ID,” a “powerful quad-core A8 chip,” and a “longer lasting 2,100 mAh battery.”

Apple will be holding a launch event the phone on Sept. 9. It’s been rumored that the phone will come out about 10 days after that.

BEIJING (AP) — An Apple supplier in China is violating safety and pay rules despite the computer giant’s promises to improve conditions, two activist groups said Thursday, ahead of the expected release of the iPhone 6.

The report by China Labor Watch and Green America adds to a string of complaints about wage, safety and environmental conditions at China’s network of contractors that produce most of the world’s personal computers and mobile phones. Global brands that rely on Chinese suppliers have responded by imposing wage and other standards and by carrying out regular inspections.

Violations at Catcher Technology’s facility in the eastern city of Suqian have worsened since they were pointed out to Apple in April 2013 by China Labor Watch, the report said. At the time, Apple promised to remedy the problems. The report said employees affected worked on parts for the latest version of Apple’s iPad and were later transferred to a facility that produces the iPhone 6.

Apple Inc., based in Cupertino, California, said it would send inspectors to investigate the latest report. It said the Suqian facility makes aluminum enclosures for MacBook and iPad computers.

An undercover investigator who got a job at the facility found violations including mandatory overtime of up to 100 hours per month, in excess of the legal limit of 36 hours, and failure to pay some wages to its 20,000 employees, the report said. It said violations of Apple policies included failing to give out protective gear and locking fire exits and windows.

An aluminum polishing workshop was filled with metal dust, a fire hazard, according to the report. It said supervisors talked about the need to reduce fire risk following an explosion at another company but no action was taken.

The latest audit of Catcher in May found “concrete areas” for improvement, the company said. It said as a result of fire safety inspections, the most recent last week, Catcher has repaired fire extinguishers, unblocked fire exits and added missing emergency exit signs.

Apple said Catcher has averaged 95 percent compliance with its limit of 60 hours of work per week so far this year.

The company has scheduled a product launch for Sept. 9 but has not said what will be released. People who follow the company believe it will be a larger iPhone or possibly a smart watch.

In 2012, Apple promised to raise wages and reduce working hours at factories in China after an audit found violations by its biggest supplier, Taiwan-based Foxconn Technology Group.

Companies including Nike Inc., Gap Inc. and The Walt Disney Co. also have set labor standards for Chinese factories that make shoes, clothing, toys and other goods sold under their brands.