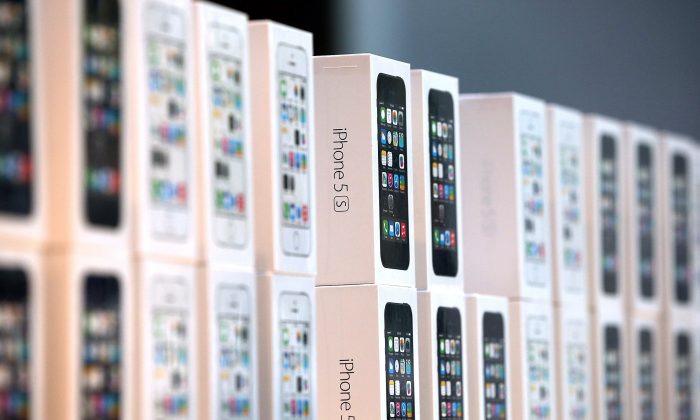 Boxes of the new Apple iPhone 5S are displayed at an Apple Store on September 20, 2013 in Palo Alto, California. (Justin Sullivan/Getty Images)
Tech

The personnel at the Teardown Analysis Service division of IHS Inc. are very good at tearing apart and analyzing costs of expensive electronic equipment. Last time, it was Motorola’s Moto X, to find out how much extra the phone costs to manufacture in North America instead of China or other Asian manufacturing hubs—not much, it was found. Now, the guys at IHS got their hands on the new iPhone 5s.

The iPhone 5s was torn down, along with its colorful and simpler 5c model. Apple likes to keep it simple and elegant and it turns out both the phones, though with varying features, were quite alike under the hood.

“The iPhone 5s features a 64-bit apps processor, low-power Double Data Rate 3 (LPDDR3) DRAM, and a novel fingerprint sensor—features that have never before been seen in a smartphone,” said Andrew Rassweiler, senior director for cost benchmarking services, in the report. “In addition, it is very interesting to see that Apple continues to collaborate closely with suppliers to develop unique radio frequency (RF) solutions that give Apple a competitive edge.”

The iPhone 5s 16 GB is sold in the market, without a contract, for $649. This suggests a profit margin of 69 percent while the 32 GB and 64 GB models command higher margins of 72 and 74 percent, respectively.

When Apple incorporated the 64–bit architecture into their device, it was meant as an innovative breakthrough that has implications for its other products. While other manufacturers include 64-bit graphic processors, Apple introduced 5s with a 64-bit applications processor.

“The move to the 64-bit apps processor is largely driven by the need for greater computational power to ensure that the smartphone’s fingerprint sensor works quickly and seamlessly,” said Wayne Lam, senior analyst for wireless communications, in the IHS report. “The processor also boosts the performance of the iPhone 5s’s camera, allowing 120 frame-per-second (FPS) video and 10 FPS photo capture. This design change will likely set the stage for 64-bit processors to be used in upcoming Apple products, including new models of the iPad, the Apple TV and even MacBook Air PCs.”

The new A7 processor, which costs $6 more than the A6 used in the iPhone5, has been sourced from long-time rival Samsung, as they hold the license to ARM’s 64-bit core.

The difference between the latest feature-filled iPhone 5s and iPhone 5c simply comes down to the former’s biometric sensor, the A7 processor, and energy-efficient memory chips. Other than these, the phones have been found to be basically the same.

The main factor that sets Apple apart from its competitors is the attention they give to the iPhone’s connection to the telecom networks, according to IHS analyst Andrew Rassweiler. “Apple seems to be spending a lot of time and money combining RF chips,” he said to allthingsd.com. “Where other phone companies would be using whatever chips its various vendors sell off-the-shelf, Apple seems to be pushing its RF suppliers to do things they don’t do for anyone else.”

“The iPhone 5 supported no more than five LTE bands. The 5s and 5c can support as many as 13, and that’s unique.”

This might be a prelude for Apple to be able to connect with all of the world’s different frequency bands using the same phone, Rassweiler concluded.

For the breakdown on sources and individual component costs, read the IHS report here.