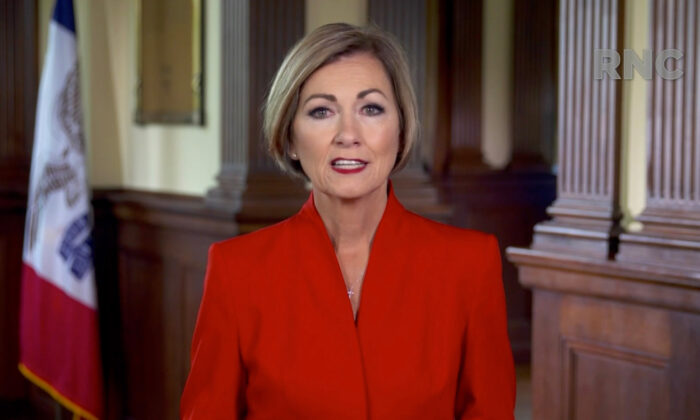 Iowa’s Republican Governor Kim Reynolds has announced that she will be running for reelection in November.

Reynolds made her announcement at the Iowa State Fairgrounds on Wednesday, according to The Des Moines Register, with just eight months to go until the 2022 midterm elections.

In her speech, 62-year-old Reynolds—who has served as governor in the state since 2017—told the crowd she was “fired up.”

“With a victory in November, we can ensure that Iowa remains a beacon of freedom, liberty, and unlimited prosperity,” Reynolds said. “A state that’s known for opportunity. An Iowa where our young people will grow up here and want to stay here to raise a family.”

The governor also pointed to her efforts to keep kids in school during the COVID-19 pandemic while condemning mask mandates, and ensuring Iowans were able to live freely despite the pandemic, The Des Moines Register reported.

“As long as I am governor, Iowa is going to be a state where you can live your life freely, where you don’t have to wake up in the morning and worry about the next thing that the government is going to do to you, your business or your children,” Reynolds said.

Reynolds will likely be up against Democratic opponent and businesswoman Deidre DeJear, who is the only Democrat actively campaigning in the election.

Reynolds became the 43rd governor of Iowa after succeeding Terry Branstad in 2017, when he resigned to become the U.S. ambassador to China under former President Donald Trump.

She served four terms as Clarke County treasurer before being elected to the Iowa Senate in November 2008. She also served as Iowa’s lieutenant governor under Branstad and became the state’s first female governor when she succeeded him. Reynolds won reelection to her first full term in 2018.

Reynolds’ priorities for Iowa include cutting taxes, creating jobs, improving access to child care, and renewable energy, among others.

Lt. Gov. Adam Gregg on Wednesday threw his support behind Reynolds, stating he was “proud” to work with a governor who stands for freedom, opportunity, and common sense. He said she led the state “through challenging times, through natural disasters, through a global pandemic, and through her leadership, we’ve come out better and stronger on the other side,” Gregg said, according to The Daily Iowan.

However, Reynolds has faced criticism from Iowa Democrats and others, most recently with regard to a bill she signed that bans male-born athletes from competing in female sports programs in schools and at colleges and universities.

The bill, known as HF 2416, states that public and private K-12 schools and community colleges, as well as colleges and universities affiliated with the National Collegiate Athletic Association (NCAA) and National Association of Intercollegiate Athletics (NAIA), are required to designate sporting events as male, female, or co-ed.

According to the governor, the bill “protects girls’ sports programs at all school levels, including high school and collegiate levels in Iowa,” and allows students to participate in sports programs based on the biological sex listed on their birth certificate.

The law went into effect March 3.

Reynolds called the bill “a victory for girls’ sports in Iowa.”