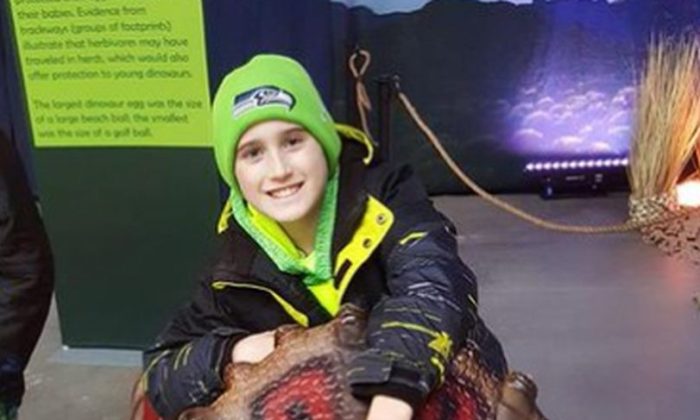 A 13-year-old Iowa boy was found dead days after he left home in the middle of a snowstorm, according to officials. (Marshalltown Police Department)
US News

Officials in Iowa have revealed the likely cause of death for missing teen Corey Brown, who was found dead amid harsh weather conditions last week.

Brown ran away after he reportedly got into a fight with his parents, according to news reports.

Police in Marshalltown, Iowa, said the boy died of blunt-force trauma after he apparently fell from a communication tower, the Des Moines Register reported.

He was found by a search team near the tower in a secluded area on the west side of the city located about 50 miles from Des Moines.

Police said he climbed over a fence and went onto the tower before he fell, officials said.

They added that no criminal activity was suspected in the teen’s death.

He had a fight with his parents after they took his phone away. Now he is dead.

His autopsy was performed by the Iowa state medical examiner earlier this week, and toxicology results wouldn’t be available for eight weeks, said police.

At the time of his disappearance, temperatures dropped below zero degrees Fahrenheit. When he didn’t return home, several hundred people offered to help search for him, but police sent them home, saying the search could be handled by professionals, the Register reported.

“It’s been hard for everybody,” said Marshalltown Police Chief Mike Tupper, KCCI reported. “Marshalltown is a very special community that is very supportive of their friends and neighbors.”

“We’ll never really know for sure what happened,” Tupper said. “From the bottom of my heart, I want to ask everybody to think about the Brown family and pray for them.”

He added that “nobody did anything wrong” in the case.

The boy disappeared on Tuesday evening after his parents took away his cell phone, NBC News reported. He and his parents got into a spat, prompting the boy to leave.

A 13-year-old Iowa boy, who ran away from home after his parents took away his cellphone, was found dead not far from his home, police say.

“Anyone with kids has had discussions with their children about household rules,” Marshalltown Police Chief Mike Tupper told NBC on Jan. 28. “This was a typical parent-teenager interaction. No anger. Nothing extraordinary.”

“He was wearing the same clothes he left home in,” Tupper said when the boy’s body was located.

“It’s a typical interaction with a 13-year-old child, nothing extraordinary,” Tupper also said last week, CBS News reported. “But he reacted emotionally to that.”

The Marshalltown Police Department said he was found dead at around 10:45 a.m. “in a secluded area on the west side” of town, according to a news release from the police department.

“At this time, there is no evidence or information that indicates criminal activity is connected to this missing person/death investigation,” the office wrote.

“All possible scenarios will be thoroughly investigated,” the department stated.

During the search for the boy, temperatures never got above 29 degrees Fahrenheit, and the low temperature was minus 9 degrees. Meanwhile, about 6 inches of snow fell in the city during that time.

At a press conference last week when the boy was still missing, his parents issued an emotional plea for his safe return.

“Corey you know how much we love you, and I’m not gonna stop until we find you,” his mother Michelle Brown said at a press conference, CBS reported.

According to the Times-Republican newspaper, he was described as a friendly and bright child.

“We are saddened to learn of the death of one of our students,” Marshalltown Community School District said in a statement to the news outlet. “Our thoughts and deepest condolences go out to the Brown family and those close to Corey. He was loved by many and will be deeply missed. We will continue to offer additional counselors at Miller Middle School and Marshalltown High School to assist those in need.”

“Our hearts bleed for the Brown family,” Mayor Joel Greer said in a statement. “The whole city and all well-wishers will keep them in our thoughts and continue our prayers for them.”