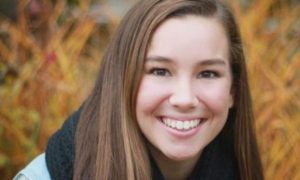 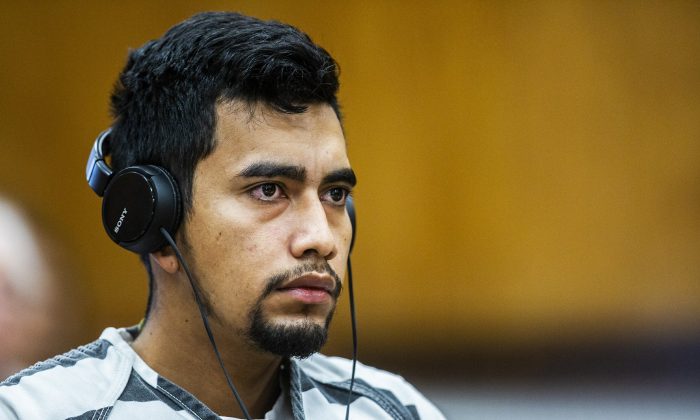 Cristhian Bahena Rivera wears headphones during his arraignment where he pleaded not guilty to the charge of first-degree murder in the death of Mollie Tibbetts at the Poweshiek County Courthouse in Montezuma, Iowa., on Sept. 19, 2018. (Kelsey Kremer/Des Moines Register via AP)
US News

MONTEZUMA, Iowa—The former farmhand charged with first-degree murder in the abduction and stabbing death of 20-year-old Mollie Tibbetts in Iowa wants to have his trial moved to a more diverse county.

The Des Moines Register reports that 24-year-old Cristhian Bahena Rivera’s lawyers filed the motion Friday, March 1. They argue the Mexican national should be tried outside Poweshiek County to allow for more minority representation in the jury pool.

Rivera is accused of killing Tibbetts, a University of Iowa student who disappeared while out for a run July 18 in Brooklyn, Iowa. Investigators recovered her body a month later.

Two law enforcement sources told Fox News that Tibbetts’s body was found in a cornfield in Iowa. A medical examiner has said Tibbetts was stabbed to death.

Rivera also is accused of being in the country illegally. He worked at a dairy farm a few miles from where Tibbetts disappeared.

Rivera admitted to investigators he spotted Tibbetts jogging on July 18 and started jogging behind her, then alongside her after pulling over and exiting a vehicle he was driving.

“Rivera said he then panicked and got mad and that he then ‘blocked’ his ‘memory’ which is what he does when he gets very upset,” investigators stated. Next thing he knew, he was back in his car and Tibbett’s body was in his trunk. He dumped her body in a remote cornfield.

Tibbetts, a University of Iowa student, was last seen in Brooklyn, Iowa, on July 18. She was reported missing by her family the next day after she didn’t show up for work at a day camp for children.

Tibbetts’ disappearance set off a massive search involving dozens of officers from the FBI, as well as state and local agencies. They focused much of their efforts in and around Brooklyn, searching farm fields, ponds, and homes. Investigators asked anyone who was around five locations, including a car wash, a truck stop and a farm south of town, to report if they saw anything suspicious on July 18.

It’s unclear whether she returned to the home where she was dog-sitting for her boyfriend and her boyfriend’s brother, who have said they were both out of town. She was reported missing by her family the next day after she didn’t show up for work at a day camp for children.

Last week, on Aug. 15, Vice President Mike Pence said he met with the family of Tibbetts, according to the Des Moines Register. “I just want Mollie’s family to know: You’re on the hearts of every American,” he told the paper. “And we will continue to work and we will continue to pray for Mollie’s safe return.”

Her father said that his family’s meeting with Pence was “touching” and “genuine,” and the vice president was “just another father that was just hurt and bewildered by Mollie’s story,” Fox reported. “He just expressed in a very private way his compassion. It was very genuine and it was real. It was very touching,” Rob Tibbetts added.

“I got the sense that it was not a politician at all, it was just another father that was just hurt and bewildered by Mollie’s story just like everybody else in America,” Tibbetts added.