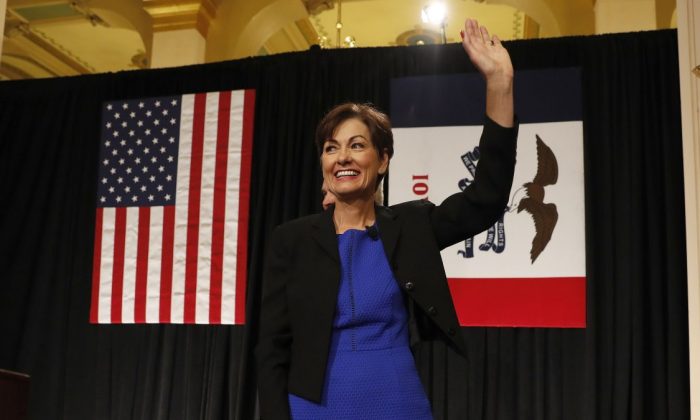 Iowa Gov. Kim Reynolds waves after speaking during a ceremonial swearing-in at the Statehouse in Des Moines, Iowa on May 24, 2017. (Charlie Neibergall/AP Photo)
AMERICA

Packing plants will not be closed, the governor also announced.

“It’s important, because this isn’t like a regular facility where you shut it down for two weeks,” Reynolds said, according to KCCI. “We are the largest hog producer in the country. We provide a third of the nation’s pork supply—25 million a year.”

Significant outbreaks of the Chinese Communist Party (CCP) virus have occurred at facilities operated by Tyson Foods Inc. and National Beef Packing Co. in Iowa. Reynolds said 250 National Guards members will be sent to the plants.

“At some point we’re going to have to be talking about euthanizing hogs, and we’re not that far from it,” Reynolds told reporters on Monday. “And that would be devastating, not only for the food supply but for the cost of food going forward.”

The U.S. Department of Agriculture recently announced $19 billion would be used to bail out farmers amid the pandemic, including $3 billion in buy meat and dairy products.

Tyson Foods late last year received approval from U.S. and Chinese authorities to export American poultry to China from all 36 its U.S.-based plants, Reuters reported. But in February, CEO Noel White said that the CCP virus outbreak in Wuhan forced the firm to slow its exports to China.

JBS SA, the Brazilian-owned meatpacking giant, said it will close down a pork processing facility in Minnesota.

“As we all learn more about coronavirus, it is clear that the disease is far more widespread across the U.S. and in our county than official estimates indicate based on limited testing,” Bob Krebs, the head of JBS USA Pork, said in a statement. “We have taken aggressive actions to keep coronavirus out of our plant and keep this critical infrastructure facility operational.”

In late January 2020, JBS SA announced a deal with Chinese food processing giant WH Group, saying that JBS will “have direct access to Chinese consumers through WH Group’s 60,000 points of sales,” Agweb reported at the time.

WH Group is also the owner of Smithfield Foods, which operates a number of plants in the United States, and a report last week revealed that the CCP-tied owners of WH Group had visited a Smithfield plant at the center of a COVID-19 outbreak roughly a month after the White House banned all travel from China.