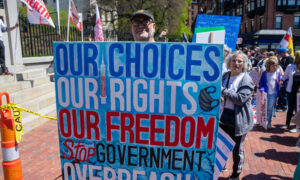 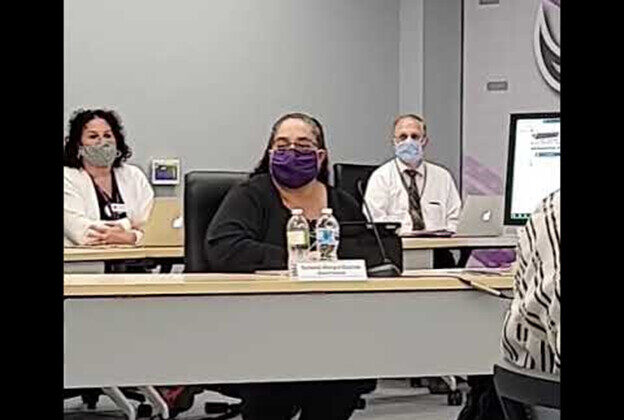 School board member Soneeta Mangra-Dutcher speaks during debate on the confirmation of Louis Fountain as the district's new director of equity, inclusion and belonging. in Johnston, Iowa, on May 3, 2021. (Screenshot The Epoch Times/Johnson Community School District)
US News

JOHNSTON, Iowa—A local school board in Iowa approved a director of equity, inclusion, and belonging despite social media posts that denounced black conservatives with racially insulting language and expressed fear and distrust of the police.

The nominee refused to apologize, saying his posts reflect his and others’ experiences.

On May 3, the school board of Johnston, a suburb of Des Moines, approved Louis Fountain as its newest administrative team member by a 6–1 vote.

In late April, the district had announced Fountain as its choice for the position. But on April 27, reports surfaced that Fountain had made several controversial social media posts.

Some Johnston residents asked the board to delay the vote and give the community an opportunity to hold a town hall meeting to discuss the issue.

“Give yourself time to process all of the facts and give them fair thought before making your decisions,” said Johnston resident Roxanne McGee, who questioned if students of law enforcement officers or conservative families would feel a sense of inclusion and belonging.

Mary White, another Johnston resident, said she doesn’t believe parents in the district are racist but they are being “viciously attacked” and not included in the educational content taught their children.

“Does the district now condone these statements,” she asked. “Do they publicly condone these actions? It is in violation of your own policy.”

The district’s policy states that while employees have a right to speak out on matters of public concern, the district has the right to respond when personal use of social media interferes with the employee’s ability to perform his or her duties or affects the district’s efforts to provide educational services.

“If you submit or post information or comments that are not related to the District, your activities may still result in professional repercussions,” the policy states.

“Mr. Fountain is bringing a rich set of skills, relationships, and experiences to our district,” Superintendent Laura Kacer said, as reported on the district’s website. “He is passionate about equity and inclusion and we are excited to have him here in Johnston to do this important and needed work.”

Fountain announced publicly on his Facebook page he was “beyond excited” to be Johnston’s pick on April 22. His social media account was subsequently scrubbed, although The Epoch Times saved several posts before they were deleted.

On Feb. 18, he posted: “Herschel Walker didn’t forget he was BLACK, he just doesn’t want to be.”

Fountain “liked” two comments referring to Kanye West and Walker, two black conservatives, by a derogatory name used for blacks who are said to sell out to whites.

Fountain advocated against police being in schools, referring to a “school-to-prison pipeline” if police are present there.

He also said he fears the police driving behind him. “History has shown me to fear the badge more than to fear a gun.”

On May 31, as Black Lives Matter protests were taking place in Des Moines, Fountain shared 10 detailed tips for taking part in a protest, with advice such as: “Water makes pepper spray worse. Use baking soda in water or liquid antacid in water. Don’t wear contacts.”

In one post, Fountain vowed to pack the electoral map on his next trip so he knows where not to stop for gas.

He also shared a photo of the fly that landed on former Vice President Mike Pence’s head during the vice presidential debate, saying, “usually flies land on [expletive deleted].”

Despite these and other posts, Fountain was approved by the school board.

At the May 3 board meeting, Jennifer Chamberland, one of the six members who voted yes, said she “struggled” with the topic and understands the concerns, but she added that “as a white person, I don’t necessarily have to understand why comments are made in that regard.”

She said that while she “hopes” all students are included in the inclusiveness, the position is “more geared toward creating equity with our minority populations.”

“So for that, to say that our focus should be on making sure that white kids feel accepted is not to my understanding necessarily what we should be focusing on.”

Board member Soneeta Mangra-Dutcher also voted for his confirmation. She said as a person of color on the board, she received messages that were “absolutely offensive, hurtful, and disgusting” from the community.

Mangra-Dutcher said she “feels the same way” as some of Fountain’s posts.

“I will say right here in front of everybody, there are places in the state that I don’t feel comfortable stopping in,” she said. “I have stopped in some place and been told, ‘We don’t serve people like you.’”

Jeanie Kerber, the board’s vice president, asked the community to “open up their hearts and their minds” to Fountain.

Alicia Clevenger was the only member to vote against Fountain’s confirmation. While she supports the position, she was frustrated she wasn’t allowed to ask Fountain questions.

“If we were hiring a special ed teacher, and they had 800 comments that were great, but they had three that we had questions about, I struggle to believe that we wouldn’t ask questions,” she said. “I wanted to know how can he say those things about Herschel Walker and then teach our kids about inclusivity. We have children of color in our district from conservative homes.”

After the vote, Fountain thanked his supporters for “fighting” for him.

“Many of the comments I have made about what it is to feel safe in America as a black person reflect the experiences that I and many others have had,” Fountain said. “I do not apologize for this.”