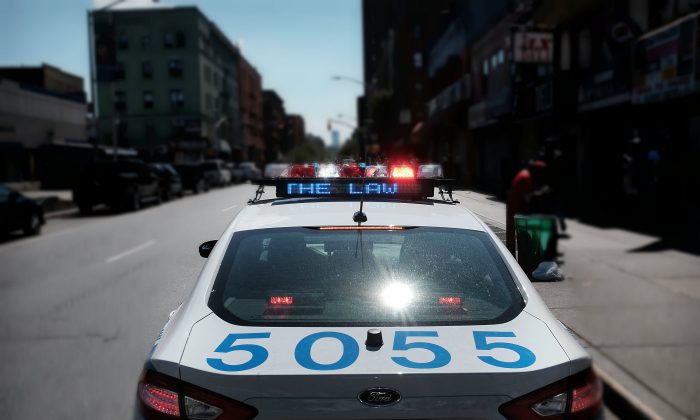 Jasmine Teed, 18, was charged with child endangerment after two of her children were found wandering naked in the street on Nov. 2, 2017. (Spencer Platt/Getty Images)
Crime and Incidents

A mother of two in Adel, Iowa, is being charged with two counts of child endangerment after her twin boys were found wandering naked in the street on Thursday, Nov. 2.

The boys were found near the intersection of U.S. Highway 6 and U.S. Highway 169, “which was very busy at this time of day,” an Adel officer wrote in his report to the Dallas County Court, The Des Moines Register reported.

A resident on the same street noticed the children after hearing honking and brought them back to the apartment, but was not able to find the responsible adult, a press release from the Adel Police Department states.

The temperature outside was 43 degrees at the time, and the boys were not wearing any clothes, local media reported.

Their mother, 18-year-old Jasmine Teed, was inside the house sleeping at the time, and only woke up after an officer shook her.

Jasmine Teed was charged with child endangerment after her twins were found wandering the streets naked #J2150bm https://t.co/EasryUasWB

The children and Teed’s daughter were taken and given to Teed’s grandmother and mother, WHO TV reported.

Teed’s neighbor, Cindy Golightly, told WHO that she has lived right next door to Teed for months and she’s never seen the children unattended.

“Everybody makes mistakes and we all need to be held responsible for what we do, but she is only 18 years old and she’s got three little kids,” she said. “You know, she’s trying the best she is … I’ve got grandkids, I’ve got 10 of them, and they got out of the house [at one point].”

Teed was arrested and booked into the Dallas County Jail Thursday afternoon. Her bond was set at $2,000, WHO TV reported.

A magistrate approved an order of protection on Friday, Nov. 3, and said Teed may not have any contact with the two children or the relatives they are staying with, Fox News reported.