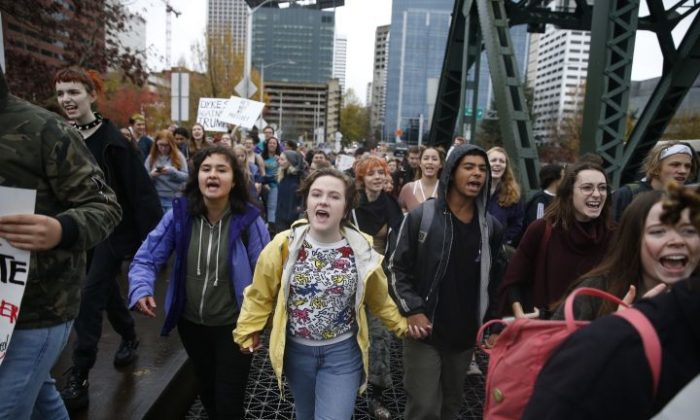 Portland Public School students walked out of schools Monday, Nov. 14, 2016, and converg on Pioneer Courthouse Square and crossed the Hawthorne Bridge for a protest against the results of last week's presidential election. Hundreds of high school students joined protests in Portland on Monday against Donald Trumps election (Beth Nakamura/The Oregonian via AP)
US

Iowa Lawmaker to Colleges: ‘Suck It Up, Buttercup’

An Iowa lawmaker plans to introduce what he calls the “suck it up, buttercup bill” to cut budgets at public universities that spend extra money on students upset about the presidential election.

Republican Rep. Bobby Kaufmann tells The Des Moines Register that the proposed legislation would target schools using taxpayer dollars to fund election-related sit-ins and grief counseling above and beyond what is normally available to students. He said the bill will also call for creating new penalties for protesters who block highways.

“I’ve seen four or five schools in other states that are establishing ‘cry zones’ where they’re staffed by state grief counselors and kids and come cry out their sensitivity to the election results,” Kaufmann said. “I find this whole hysteria to be incredibly annoying. People have the right to be hysterical … on their own time.”

Iowa’s public four-year universities say no such money has been spent.

Protests haven’t been limited to college campuses in Iowa. More than 100 protesters shut down Interstate 80 in Iowa City for about a half hour on Friday night. Iowa State Patrol spokesman Sgt. Nathan Ludwig said troopers quickly cleared the Friday protest, but he said the event could have posed a threat to public safety.

Similar protests and rallies have been held nationwide following Donald Trump’s victory in the presidential election.