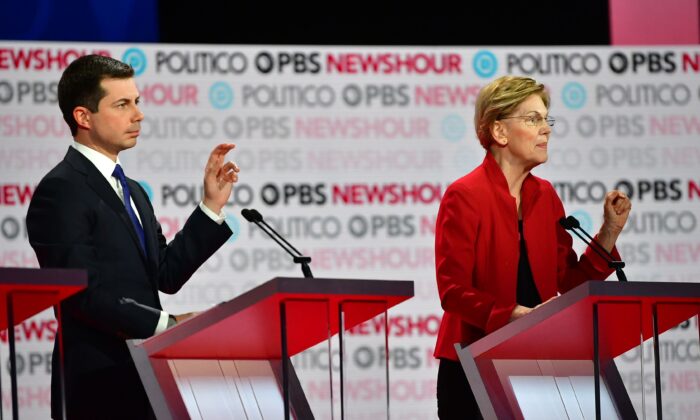 The Jan. 14 Democratic presidential debate in Des Moines, Iowa, will be the last significant chance for the candidates to impress voters before Iowans take a stand in their caucuses.

The debate, the seventh this election cycle, will be particularly crucial for Pete Buttigieg and Sen. Elizabeth Warren (D-Mass.) who have been running in third and fourth place in recent national polls.

It will also provide a chance for the billionaire hedge fund manager and environmental activist Tom Steyer, as well as Sen. Amy Klobuchar (D-Minn.), to make their cases. Their poll performances, however, make their bids a long shot. None of the other candidates cleared the more stringent qualification criteria for the debate.

The Iowa caucuses, scheduled for Feb. 3, are a traditional litmus test for the viability of presidential candidates. Biden, Sanders, Warren, and Buttigieg have all shown strong numbers in Iowa polls at some point, particularly Buttigieg, who peaked at 26 percent, leading the pack in a mid-November Iowa State University (ISU) poll. Recently, however, his numbers have started to slip.

Warren had her golden era among Iowans in October, reaching 28 percent in an ISU poll, but has since fallen behind the other three candidates.

In national polls, Warren and Buttigieg have fallen behind further, according to records kept by RealClearPolitics.

“Biden seems to be firming up his front leading status, and Sanders is appearing to be his main rival,” said Spencer Kimball, assistant professor and director of Emerson College Polling, in an email to The Epoch Times.

“Warren seems to have slipped with younger voters, which has benefited Sanders and also Andrew Yang,” he added. “Buttigieg is going to have to do very well in Iowa and New Hampshire for a major bounce as he is struggling in national polls and in almost every state poll outside Iowa and New Hampshire.”

Both Warren and Buttigieg also have trouble attracting minority voters. Warren polled at 11 percent among blacks and Hispanics in the recent Morning Consult poll (pdf). Buttigieg was at 4 percent and dropping among Hispanics, and among blacks; his numbers weren’t even worth mentioning for the pollster.

The mechanism of the Iowa caucuses may give an advantage to Sanders. As the process works, the caucus-goers who pick a candidate with less than 15 percent support in their precinct need to pick again. Warren has oscillated at around 16 percent in recent Iowa polls. If she fails to clear the 15 percent bar, her supporters might switch to Sanders, giving him a major boost.

The Democratic National Committee has set more strict rules for the Iowa debate, and only six candidates made the cut, down from seven in the prior debate.

Sen. Cory Booker (D-N.J.) quit the race on Jan. 13, citing a lack of funds. He also failed to clear the needed level of support in the polls to qualify for the debate. Former New York City mayor, gun-control activist, and billionaire Michael Bloomberg managed to score high enough in polls but failed to gather the requisite 225,000 donors sufficiently distributed in at least 20 states. Bloomberg, who joined the race in November, doesn’t plan to collect donations for his presidential campaign. The other candidates, including entrepreneur and lawyer Andrew Yang and Rep. Tulsi Gabbard (D-Hawaii), failed to meet both criteria.

“Bloomberg and Klobuchar are the alternatives to Biden, but need Biden to slip to gain,” Kimball said.

The debate will be moderated by CNN’s Wolf Blitzer and Abby Phillip, and chief politics reporter at the Des Moines Register, Brianne Pfannenstiel.

Viewership for the debates has been dropping, with the last one watched live on television by less than 6.2 million people, down from the more than 18 million who tuned in for the second night of the first debate on June 27, according to The Hollywood Reporter.