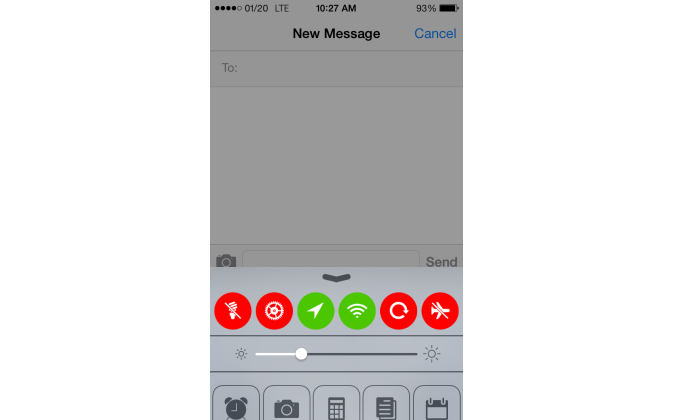 We recently did an article about “must-have” jailbreak tweaks for the iOS 7 jailbreak. While we always try to make our lists as comprehensive as possible, sometimes there are things we miss. Other times, tweaks are released after we publish the article. In any case, we would like to share with our readers some more “must-have” tweaks. We are especially pleased with this list, and we think our readers will find these tweaks exceptionally useful. All of these are compatible with ARM-64 devices (64 bit devices with A7 processors, i.e. the iPhone 5S, iPad Air, and iPad Mini Retina). Please share with us with us what you think in the comments section below.

In our last article, we recommended CCSettings. We found three tweaks, that, together, make for a much more useful package. These three tweaks are the first three shown below: CCControls, CCHide, and QuickActivator.

CCControls – This tweak allows you to customize the system toggles (by default, the system toggles are at the top of the control center). This gives you 25 different toggles to choose from, lets you customize the shape, fill and color of each toggle, lets you decide how many toggles you want to show at a time (up to six), lets you add more than six either by scrolling or by paging to the right, and gives you the option to make some of these toggles unavailable when the control center is used while the device is locked. The screenshot below is just some of the color, fill, and shape settings you can choose from.

QuickActivator – This tweak lets you change what shortcuts are located in the quick launch section at the bottom of the control center (see screenshots below). You can add custom shortcuts, remove the default ones (flashlight, calculator, timer, and camera), change how many show at a time (up to five), or allow paging or scrolling for additional shortcuts. While tapping the default shortcuts opens the default applications, you can add a “hold” action. This means that if you hold down on the default shortcut instead of tapping it, it can open something else besides what it is set to open by default. You also have the option to change the icons (called glyphs).

For custom shortcuts, you can choose both the tap and hold actions, and you can also choose the icon to be displayed. For example, in my control center (see screenshot below), to the right of the calculator is something that looks like documents. If I tap the document shortcut, Pages will open. If I hold it, Numbers will open. Also, you can change the default timer tap action to open up the World Clock, Stopwatch, or Alarm if you prefer.

DateCarrier – This makes finding the date easier. It replaces the carrier name (Verizon, Sprint, AT&T, T-Mobile, etc) with the date (see screenshot below).

StatusBarFix2 – This program fixes the status bar problem that most have after installing the iOS 7 jailbreak. The status bar, for many people, will not change color when it is supposed to. I noticed that I could not read the status bar when in a call, since the text was black and my background is also black during calls. This tweak fixed it so that the text becomes white when my background is black.

QuickShoot Pro 2 – Ever need to take a photo quickly, only to miss the opportunity by the time you unlocked your phone and loaded the camera app? QuickShoot Pro 2 fixes this problem for the most part. It lets you take a photo or start recording video by any shortcut you can think of. I chose to use physical buttons for mine so that it would be as quick as possible. On my phone, to take a photo, all I have to do is press and hold the home button. To start recording video, all I have to do is press the home button three times. Of course, it is better to have the app open so that you can see exactly what you are recording or taking a picture of, but when time is of the essence, QuickShoot Pro 2 is a good choice. It doesn’t start recording or take the shots as quick as we’d like, but it’s still far faster than the alternative.

Be sure to let us know what you think below!