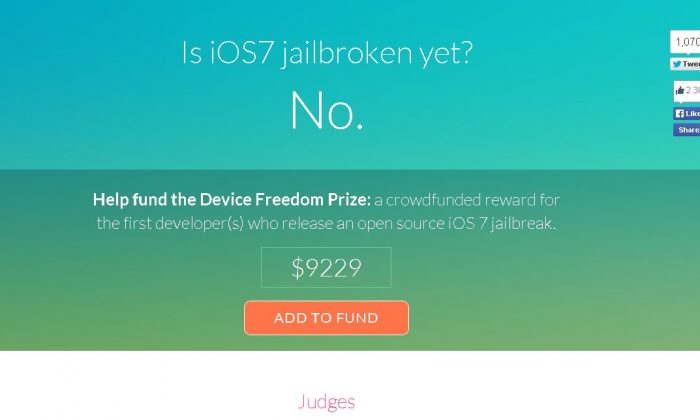 An iOS 7 jailbreak website, isios7jailbrokenyet.com, was set up to solicit donations in an attempt to hasten the process of allowing users to run software that’s not approved by Apple.

Users have complained that iPhones, iPads, and iPod Touches are too restrictive in what users can use on their devices. So, with previous iOS versions, there has been an effort to jailbreak them, which removes Apple’s restrictions.

The iOS 7 has not been jailbroken jet, but the website–organized by a disabled man–has generated more than $9,000 as of Saturday for anyone who can do it successfully.

“We strongly believe that users should have the freedom to control their devices. We wanted an open source jailbreak for iOS 7, giving users the capability to install what they want on their own devices and the ability to audit the code they’re using to do so. Jailbreaking is also critical to ensuring that the disabled are able to use their mobile devices as easily as possible. So we started a prize for the first people who can do it,” it reads.

The organizer of the website, Chris Maury, told the Washington Post that he has Stargardt’s Macular Degeneration, which is a genetic disorder that damages his vision. He said that Apple’s standard iPhone features don’t meet his requirements and some third-party apps aren’t available in the Apple Store.

Jailbreaking, he said, helps to “empower a group of people who aren’t necessarily considered first with new functionality.”

The crowdfunding site says that the jailbreak software has to work on iPhone 4S, 5, and 5C running iOS 7. It also has to be untethered, publicly released, free of charge, and released under one of the OSI-approved licenses.

According to the IB Times, Cydia creator Jay Freeman, who goes by the handle Saurik on Reddit, wrote that the jailbreak-for-bounty project has shortcomings, and he added that another company is coming out with an iOS 7 jailbreak shortly.

He added: “Meanwhile, it changes the dynamics in the minds of the people contributing: Normally, people contribute after the fact to the teams that built something that they found of value; under the model of this website, people contribute ahead of time, and then hope that the thing that is released works for their specific device (or even “runs on their computer,” etc.), and if it doesn’t, they are kind of out of luck.”