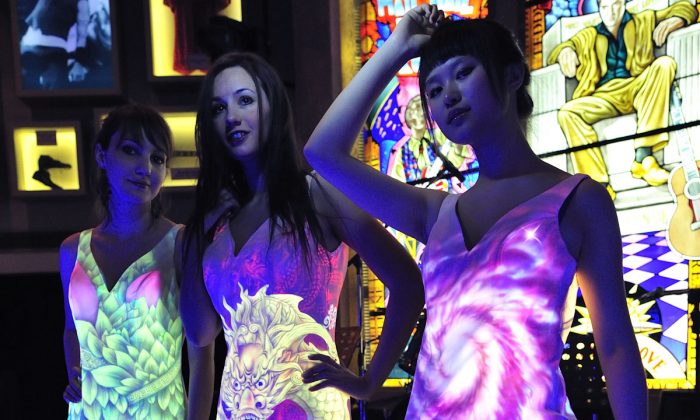 At first glance, one of his dresses may appear to be stark white and plain, but once the lights are off, Tang Dongbai’s UV painted works turn the wearer into an ethereal mermaid, a floor-length window to another galaxy, or another glowing, surreal scene.

“I really wanted to create an invisible art,” Tang said. “You can’t see them during the day, but that doesn’t mean it doesn’t exist.”

Tang has been UV painting on dresses for three years now and has been creating illusionist paintings since 1996. After becoming a prominent artist in China, he opened his International Painting Art School in Beijing in 2006 and designed the murals for the 2008 Summer Olympics.

In 2011, he moved to Chicago and opened his International Airbrush Art School to students around the world, and his UV painted cars and gowns, as well as murals, are featured in shows and museums like the Chicago Auto Show and Hard Rock Cafe. Recently he moved to New York, where one of dresses is now on display.

“I suddenly had the idea to want to do this,” Tang said. “I’ve always liked painting and luminescent painting, so I researched ultraviolent painting—and I thought, it’d be best to do it on something lasting, like a gown, so that’s what I went with.”

Tang then purchased many evening gowns, and found that his designs came out quite well on the high-quality fabrics.

“I’d been invited to do a show in America, so I brought the five dresses I had, and I came here,” Tang said.

To Tang, creating these illusions is more than just a technical feat and novelty.

Tang said that the mysterious and the supernormal was something he wanted to capture in his works.

“I was always interested in things like the supernormal, the supernatural, qigong, these types of things,” Tang said. “I always felt that there is really so much that our physical eyes can’t see.”

“For instance, even light is something we can’t see the full spectrum of,” Tang said. “We can see things under visible light, but we can’t see infrared rays, ultraviolet rays, these types of things.”

“Under visible light, that’s all white, you can’t see any of it—but you can’t say that just because you can’t see it, it doesn’t exist,” Tang said. “So I wanted to explore ultraviolet and make that accessible to people; they see it and realize something else exists. It can change people’s perception and way of thinking about things. It’s this sort of imagination.

“I always want to depict beautiful and wondrous scenes,” he said. “Something that gives people a sense of wonder.”

When people walk into his exhibit and the lights are turned off, “they’re in awe … that something so beautiful was invisible.”

When Tang got the idea, it came from wanting to create work in motion.

“Clothes are worn on the human body and the human body is the highest design,” Tang said. “And human beings are living, moving. When the dress is worn on the person, the piece becomes living and moving as well, and it can be seen from all sides.”

People around the world have found his work through international coverage and magazines in different countries and want to buy the dresses.

“Sometimes people want them as their wedding gowns, or evening gowns, so they can turn off the light to show everyone something very unique,” Tang said.

But he hasn’t set up shop yet. “I have been thinking about it,” Tang said. “It would probably be through an event.”