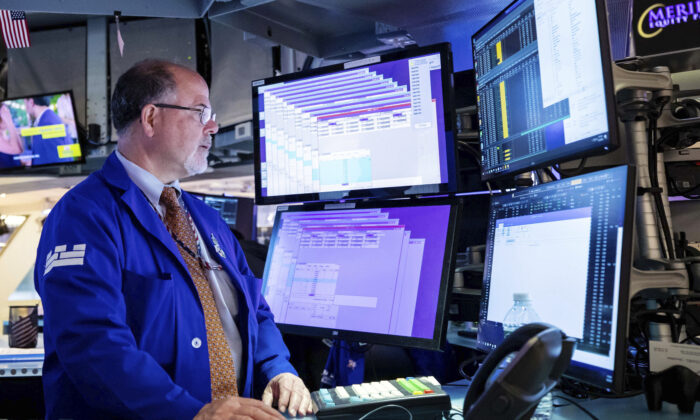 Investors have slashed their stock allocations to the lowest level since the collapse of Lehman Brothers during the financial crisis of 2008–09, a new poll found.

According to Bank of America’s (BofA) latest monthly survey of global fund managers, investors’ expectations of international growth and corporate profits fell to levels not seen since the economic collapse more than a decade ago. The survey also discovered that investors’ exposure to cash rose to a 21-year high.

The poll of fund managers described the situation as “full capitulation.”

A recession is now the consensus on Wall Street, with most investors agreeing that an economic downturn is likely.

In addition, 58 percent of fund managers conceded that they are taking lower than normal risks. This, too, was a record high.

Meanwhile, the BofA research indicates that investors want businesses to bolster their balance sheets rather than spend more on capital expenditures or share buybacks.

Looking ahead, the global economy’s biggest “tail risks” are inflation remaining elevated, a worldwide recession, hawkish central banks, and systemic credit events. But investors aren’t too concerned about the Ukraine–Russia military conflict or a resurgence of COVID-19.

Institutional investors also assessed the most crowded trades in current financial markets. The BofA July report noted going long on the U.S. dollar was the most crowded trade, followed by going long on crude oil, commodities, and ESG (environmental, social, and governance) assets. At the same time, investors are most bullish on health care, consumer staples, and energy, and most bearish on discretionary, utilities, and banks.

When it comes to the Federal Reserve, survey respondents believe that if the Personal Consumption Expenditures Price Index (PCEPI) falls below 4 percent, it would be the most likely reason for the Fed to “pause” its rate increases or “pivot” on monetary policy this year. The PCEPI is the central bank’s preferred inflation gauge.

The PCEPI rose 6.3 percent year over year in May, easing from the all-time high rate of 6.6 percent in March.

Despite the overall pessimistic nature of investors in this market, the BofA study indicated that its bull/bear indicator is situated at “max bearish.” That suggests a turnaround in the equities arena could be on the horizon, as “sentiment says stocks/credit rally in coming weeks.”

The leading benchmark indexes have recently enjoyed positive momentum. Over the past month, for example, the Dow Jones Industrial Average has advanced about 4.5 percent, the Nasdaq Composite Index picked up 7.6 percent, and the S&P 500 Index has risen roughly 5.3 percent.

Although the U.S. Dollar Index (DXY) has rallied about 11.3 percent year to date, the index that gauges the greenback against a basket of currencies has tumbled nearly 2 percent over the past week.

“It is estimated that nearly 40 percent of S&P 500 revenues are derived from outside the United States. As a result, dollar strength places downward pressure on both sales and earnings, which are also affected by currency translation,” Lynch stated.

Crude oil has eased by more than 1 percent over the past month, as West Texas Intermediate and Brent crude have hovered around $100 per barrel.

But while stocks have rebounded in recent sessions, recession concerns are still ubiquitous, says Nancy Tengler, the CEO and CIO of Laffer Tengler Investments.

Tengler alluded to the 2- and 10-year U.S. Treasury yields being inverted at minus-25 basis points, the deepest inversion in more than two decades. This is considered one of the most reliable indicators of future recessions because it has accurately predicted nearly every economic downturn for the past 70 years.

She also pointed to copper, a key industrial metal that has slumped 26.5 percent so far this year.

“The sell-off in copper futures is presaging economic slowdown and a potential recession. We have been warning of a slowdown for just about a year. But now, we have one of the main leading indicators of recession firmly in place. The yield curve has inverted,” Tengler wrote in a research note.

“Still, we think it is reasonable to believe a recession is on the horizon. The question, of course, is when and how deep. And whether the market has priced in a recession. Our view has been memorialized in numerous commentaries over the last few months. If [the recession is] not fully priced in, we think the market is closer to a bottom, retesting the spring lows.”

But Jim Besaw, CIO of wealth management firm GenTrust, says some indicators suggest that the U.S. economy might already be in a recession.

The Federal Reserve Bank of Atlanta’s GDPNow model estimate, for example, is running at minus-1.6 percent for the second quarter of 2022. If accurate, it would be the second consecutive quarter of negative GDP, which is the technical definition of a recession.

Morgan Stanley’s Mike Wilson asserted in a note to clients that even if the United States avoids a recession, “we don’t believe this bear market is over.”