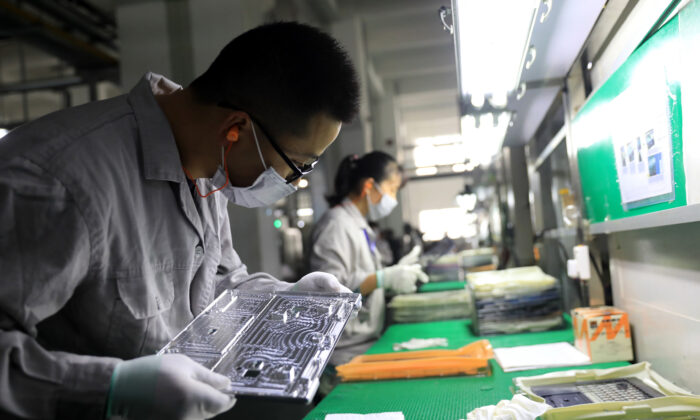 Investors are casting doubt about the financial health of one of China’s most strategically important technology companies.

According to Bloomberg, Tsinghua Unigroup’s Hong Kong-traded $750 million bonds, due in 2023, plunged to as low as 75 cents on the dollar on Nov. 1 before recovering.

Trading of the Shenzhen-listed subsidiary of the company—Unigroup Guoxin Microelectronics Co.—was halted on Nov. 6 after the stock suddenly fell 10 percent.

Tsinghua Unigroup, which is among a handful of chipmakers with central government backing, had to release a statement reassuring investors of its liquidity. On a call with investors, it said that it had ample cash on hand, totaling $2.4 billion, and up to $16 billion of undrawn credit lines, according to Bloomberg.

Most importantly, it announced that it hadn’t defaulted on its bonds. Credit Suisse is currently working with Tsinghua Unigroup on extensions related to existing bank loans.

The company has levered up in recent years to fuel its growth—mostly accruing technical know-how by acquiring other companies. Tsinghua Unigroup has issued three series of U.S. dollar-denominated bonds in Hong Kong, totaling $1.875 billion.

Tsinghua Unigroup is one of China’s most important indigenous companies. It’s the leading Chinese semiconductor maker, developing and producing chips used in a variety of functions including domestically made smartphones and China’s national ID system.

Unigroup is critical to Beijing’s plans for digital self-reliance. Its success has become increasingly urgent as the United States has moved to block Chinese manufacturers such as telecom giant Huawei and security hardware firm Hikvision from purchasing U.S.-made microchips. Unigroup’s homegrown chips are supposed to replace that supply.

In 2015, Unigroup offered to acquire U.S. chipmaker Micron Technologies for $23 billion; the transaction was ultimately scrapped because of opposition in Washington.

In early 2019, Unigroup completed the development of China’s first 64-layer 3D NAND flash memory, a major breakthrough given that the technology is currently dominated by manufacturers in Japan, South Korea, and the United States.

The fund, which has around 140 billion yuan ($22 billion) of capital, has concerned U.S. authorities due to its support of Chinese chipmakers that could threaten the global market position of U.S. chipmakers such as the San Diego-based Qualcomm Inc.

Beijing is now fundraising for a second fund to support the chipmaking sector, and interestingly, is soliciting foreign investors to contribute. This decision was approved even as disagreements over forced technology transfer and technological competition between China and the United States have been a major cause of the ongoing trade war.

At the same time, Beijing has been looking to reduce public universities’ stakes in companies such as Unigroup, citing concerns over corruption. In October 2018, Tsinghua Holdings sought to transfer a 36 percent stake in Unigroup to Shenzhen Investment Holdings, an investment vehicle owned by the Shenzhen City government.

But the sale wasn’t successful and has been shelved indefinitely.