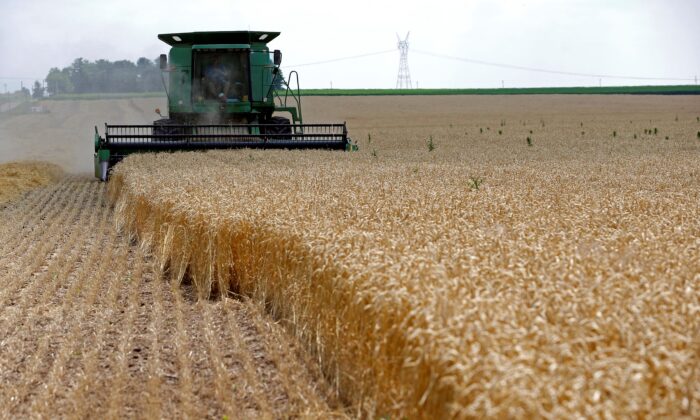 A combine drives over stalks of soft red winter wheat during the harvest on a farm in Dixon, Ill. on July 16, 2013. (Jim Young/Reuters)
Investment

Investors Flock to Farmland as a Hedge Against Inflation

Investors in the United States are rapidly buying farmland, seeking to use agricultural properties as a hedge against inflation in their portfolios as food prices reach record highs.

Agricultural land value has risen by as much as 30 percent in the past year, as rampant price inflation drives many investors to seek out reliable, relatively stable assets such as farmland in order to hedge their fortunes against the entropic effect of inflation. This new wave of investment may also be attributable to rising demand for food, as food prices reach new highs, opening the door for higher production.

The most recent Consumer Price Index report from the U.S. Bureau of Labor Statistics indicates that food prices rose by 7.9 percent in the year ending in February 2022, but the pending figures for March may be more drastic on account of recent geopolitical events.

Rising food prices, which have been a consistent feature of the post-CCP (Chinese Communist Party) virus economy, have been exacerbated as a result of Russia’s invasion of Ukraine, which disrupted the global food supply by limiting exports from two of the world’s largest grain producers. Though the United States does not source its wheat or corn supply from Eastern Europe to any significant extent, the ripple effects of the war and perceived scarcity of crops have driven food prices higher throughout the world.

Farmland is seen as one of the safest, most reliable investments for large fund managers, with consistent annual returns and a strong likelihood of land price appreciation: The NCREIF Farmland Index reported total annual returns of 11.1 percent on cropland in 2021.

Perhaps no agriculture investor today is more notorious than one William Henry Gates III, who has spent billions to amass an estimated 242,000 acres of farmland as of August 2021. While Bill Gates has insisted that these acquisitions are merely investments and not a part of his advocacy against climate change, these acquisitions have raised scrutiny from critics who fear that Gates’ acquisitions will give the Microsoft founder an unacceptable degree of control over the American food supply.

“…[A]t best, Gates’ campaign to scarf up America’s agricultural real estate is a signal that feudalism may again be in vogue,” wrote Robert F. Kennedy, Jr., in an opinion column last year. “At worst, his buying spree is a harbinger of something far more alarming—the control of global food supplies by a power-hungry megalomaniac with a Napoleon complex.”

However, Gates is just one among many investors changing the agricultural industry at a rapid pace. In Iowa last year, the pool of buyers for the state’s agricultural land consisted of 35 percent investors and 65 percent farmers, in contrast to only 18 percent investors in 2019. The U.S. Department of Agriculture estimates that 70 percent of U.S. farmland is set to change hands in the next 20 years, as the baby boom retirement wave hits the industry, giving big openings for institutional investors to further entrench themselves in the agricultural industry.

With this change comes significant disruption to agrarian communities, who now find themselves faced with rapidly rising land costs and high competition. For perhaps the most extreme example, the Amish community in Pennsylvania has been particularly affected by this development, exacerbated by the demands of their rapidly growing population: In Lancaster County, sometimes called the “Amish capital of the world” for its high population of Anabaptist Plain People, only about one-third of Amish are farmers, from a population which overwhelmingly consisted of farmers one or two generations ago, as land prices have become prohibitively expensive.

However, the greatest impacts of growing institutional investment in farmland are not restricted to the hat and bonnet wearing religionists of Lancaster County: Throughout the country, the means of food production are being consolidated in the hands of relatively few investors at a rapid rate, disrupting a norm of farmland ownership by farmers which has persisted in America for generations.