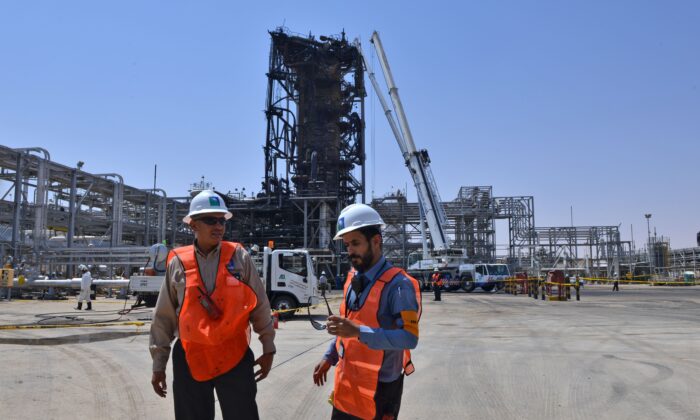 Investors Continue to Keep an Eye on Oil, Gold Amid Iran Tensions

While prices have retreated after President Donald Trump’s address to the nation, which eased some apprehension, investors are continuing to pay close attention to geopolitical risks.

Oil and gold prices fell sharply after President Donald Trump said on Jan. 8 that Iran “appears to be standing down.” The morning after missile strikes that targeted American forces in Iraq, Trump said that there were “no casualties” and all American soldiers were safe.

Oil prices spiked due to fears of retaliation by Iran after the killing of top military commander Qassem Soleimani in a U.S. airstrike. The international benchmark Brent crude climbed above $70 a barrel for the first time in four months. However, it plunged to $65 on Jan 8.

Trump’s speech took some of the geopolitical risk premium out of oil prices, according to Phil Flynn, senior energy analyst at Price Futures Group in Chicago.

“From the president’s speech, we’re getting a strong sense that this crisis is, if not over, at least at a pause,” Flynn said.

“Now the risk to oil is actually lower because the Iranians at this point don’t want to risk escalating the situation. So any proposed attacks that they may have on the oil fields or tankers are probably going to be put off because they don’t want to raise the temperatures.”

In 2019, Iran attacked major Saudi Arabian oil facilities and targeted oil tankers in the Strait of Hormuz, which boosted geopolitical risks in the region.

Trump, in his speech, mentioned the United States’ energy independence, saying the country is no longer reliant on Middle East oil.

“We are now the No. 1 producer of oil and natural gas anywhere in the world. We are independent, and we do not need Middle East oil,” he said.

The increase in U.S. oil production in the past decade has strengthened the U.S. position in the Middle East, according to experts.

“Geopolitical tensions in the Middle East certainly affect oil prices, but less so today than decades ago,” said Robert Johnson, professor of finance at Creighton University.

“Some pundits were surprised that oil prices didn’t spike more in response to the tensions with Iran. That would have certainly been the case in the past, but the oil world has changed. The United States is now the leading oil producer in the world.”

Jeffrey Currie, head of commodities research at Goldman Sachs, noted in a report that gold performs well during wars or military escalations, as experienced during the beginning of both Gulf wars and during the events of Sept. 11, 2001.

“History shows that under most outcomes, gold will likely rally to well beyond current levels,” Currie said, adding that gold would perform better than oil if the U.S.–Iran tensions continue.

Despite the recent rally, the price of gold is still below all-time highs, according to Chuck Self, chief investment officer at iSectors, an investment strategy firm based in Wisconsin.

“Gold is cheaper than stocks or bonds,” he said. “A more intense Middle East crisis would make precious metals the best asset class to own in the first quarter and possibly in 2020.”

Investors flocked back to risky assets like stocks after Trump’s speech calmed the markets.

However, the crisis isn’t over, and there will be escalations of the U.S.–Iran conflict in the weeks and months to come, according to Deric Scott, vice president and senior analyst at precious-metals retailer Metals.com.

He said Trump made it clear that he wouldn’t allow Iran to have a nuclear weapon.

“He’s not going to take a back seat. He’s not going to allow Iran to run the show anymore, and that is only going to cause friction,” Scott said, adding that gold could rise to as high as $3,000 this year if the conflict continues to escalate.