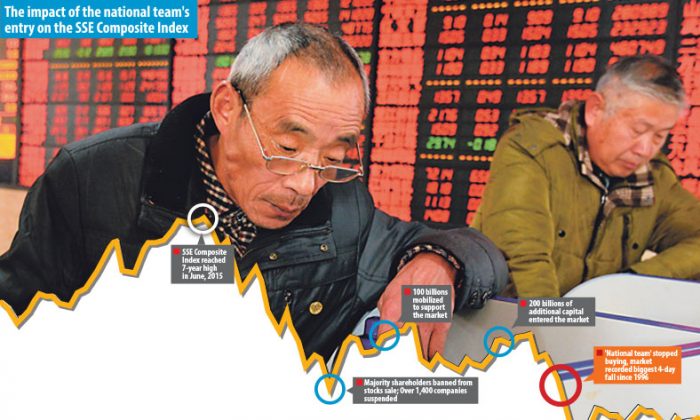 China’s “national team,” which was organized by the authorities and endowed with billions in cash to save the stock market following last year’s crash, pledged that the rescue operation would extend into the next few years. However, reports published by a number of listed companies have revealed that it has been staging a silent retreat.

This has led to an uproar from battered investors, who demanded greater disclosure of information by the China Securities Regulatory Commission (CSRC). Investor confidence has also fallen to a new low.

Turbulence in China’s A-share market has continued in 2016 following the crash. The Shanghai index has suffered a cumulative fall of some 18 percent since the beginning of the year.

On Aug 14 last year, the CSRC issued a public announcement that stated, “In the coming few years, the China Securities Finance Corporation (CSFC) will not retreat from the market, and its role to stabilize the market will remain unchanged.”

It also declared that the CSFC would enter into an agreement with Central Huijin Investment Ltd. so that the latter could become a long-term investor in the stocks concerned.

However, Xu Caiyuan, a 38-year-old professional investor who became famous in Wenzhou for protecting investor rights, said that the national team is quietly retreating from the market. He said their selling activities might have exacerbated the recent fall in the market and provided him with new evidence for suing the CSRC.

The CSRC and the CSFC, a key member of the national team, have remained tight-lipped on the rescue operations thus far.

Reports published by A-share listed companies for the last quarter of 2015 revealed that as of March 3, the national team is no longer on the top 10 stockholders lists of no less than 30 listed companies. According to some reports, these included four non-bank financial companies, including Shaanxi International Trust Co. Ltd. and Chengdu Honqi Chain Co. Ltd.

Xu expects that more companies will meet with the same fate. He pointed out that in this market crash, he suffered the biggest blow in his 18 years of investment experience.

Many of his friends also lost big fortunes, some amounting to hundreds of millions of yuan, he said. Those who had engaged in margin trading are now heavily in debt.

It is a man-made disaster, not an act of God.
— Xu Caiyuan, a professional investor

Xu said that flaws in the system were the main culprit of the crash.

“High-ranking officials should exercise prudence in what they say and should not put on the hat of a stock commentator,” he added, quoting former CSRC chairman Xiao Gang’s “reform bull theory,” which claims that despite poor market performance, the abundance of liquidity will buoy the stock market.

In January 2016, the CSRC introduced the “dual circuit breaker mechanism” in the stock market but quickly called a halt to it soon after its launch. Xu has therefore filed a lawsuit against CSRC for a number of crimes, including malpractice and failure to take proper actions.

He also said that Xiao, the disgraced chairman, should be held accountable. Xiao was forced to step down last month. The lawsuit was accepted by the Beijing Higher People’s Court after being rejected by a lower court, and the hearing will begin on March 17.

China expert Shi Cangshan said that the market crash was in fact engineered by the Jiang faction of the Chinese Communist Party, which wanted to bring down Party leader Xi Jinping.

Family members of former Party leader Jiang Zemin and his supporters Zeng Qinghong and Liu Yunshan were said to be involved.

To counteract this it was reported that Xi has kick-started a full-scale investigation of corruption within the financial sector. CSRC former chairman Xiao Gang, CSRC vice chairman Yao Gang, chairman’s assistant Zhang Yujun, and many other officials have been investigated for insider trading.

Eleven high-ranking officials of the CSFC were also investigated for “suspected involvement in illegal securities trading,” including Liu Yunshan’s son Liu Lefei, vice-chairman of the board of directors.

Lack of integrity of the communist government in handling the market crash has completely wiped out public confidence.
— Cheung Chi-wai, joint director of Prudential Brokerage

Market sentiment was further dampened as majority shareholders in the A-markets started dumping their shareholdings.

On March 8, seven listed companies, including Chixia Development, Bank of Nanjing, Changbai Mountain Tourism, Kangqiang Electronics, Kunbaida A, Coollion, and Yizumi issued public announcements of reduction in their shareholding. Prior to this, similar plans were announced by Boya Biological, Hualian Holdings, and Wing Real Estate.

Amongst these majority shareholders, Nanjing Gaoke was the most aggressive and disposed of no more than 20 million shares of Chixia Development and 30 million shares of Bank of Nanjing at the prices of no less than 6 yuan (approx. US$0.93) and 15 yuan (US$2.32) per share respectively.

According to the regulations issued by the CSRC in January, majority shareholders cannot dispose of more than 1 percent of the listed company’s total number of shares through competitive bidding over a 3-month period. Nanjing Gaoke’s sell-off has almost reached this upper limit.

According to another regulation issued by the CSRC on Jan 7, controlling shareholders and shareholders holding 5 percent or above of shares of listed companies are not allowed to dispose of more than 1 percent of the company’s total number of shares through competitive bidding within any 3-month period.

In recent months, such shareholders of Kangqiang Electronics, East Energy and Zhejiang Nanyang Technology have all reduced their shareholdings of these companies to less than 5 percent. Market analysts pointed out that such moves suggested that they might plan to dispose of all their shares in these companies in future.

China’s stock market is basically policy-led and has always been criticized for lacking transparency. Its latest crash has sent shock waves around the globe, and being adjacent to mainland China, the Hong Kong stock market has also been badly hit.

Mr. Cheung Chi-wai, joint director of Prudential Brokerage in Hong Kong, identified a number of factors that have caused the chaos in the A-market, including confusion in government policies as well as flaws in the implementation of rescue operations.

Investors have got their fingers burnt for misplacing their trust in the central government.
— Cheung Chi-wai, joint director of Prudential Brokerage

According to him, some officials have been arrested for not following instructions from the authorities, such as buying into second or third liners instead of the index constituent stocks. He lamented that the investors have got their fingers burnt for misplacing their trust in the central government.

Cheung added that the lack of integrity of the communist government in handling the market crash has completely wiped out public confidence. Citing Hong Kong as an exemplar of good governance, he said the government should not interfere too much with the stock market.

Mao Yushi, an eminent economist in China, also echoed Cheung’s views and accused the Chinese government’s rescue efforts of creating additional confusion. He added that the inconsistency of government policies and the immaturity of the investors who see the stock market as a casino should also be held responsible.