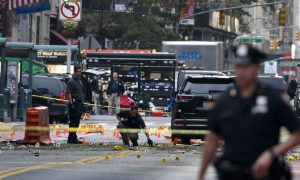 The two men who happened upon one of Ahmad Rahami’s homemade bombs in New York City are being sought by investigators.

Local authorities and federal agents are interested in speaking with the unknown men after surveillance footage captured them sifting through luggage left on the sidewalk, removing the pressure-cooker bomb, and walking away from the scene with the luggage.

“We are interested in locating them and how they came across this bag,” NYPD Chief of Counterterrorism James Waters said, reported the New York Daily News. “We tracked them through several blocks on several cameras.”

The two individuals aren’t considered suspects and were seen between the hours of 8 and 9 p.m. on West 27th Street between 6th and 7th Avenues.

“We have no reason to believe they are involved. Looks like they were more interested in taking the bag than what is in it. We don’t even know if they are aware of it,” Waters said.

The explosive device was found on West 27th street and did not detonate.

Rahami is the primary suspect in the Sept. 17 bombing in the Chelsea neighborhood that injured 29 people. On the same day, he allegedly planted bombs in two cities in New Jersey. Prior to his capture on Sept. 19, Rahami was involved in a shootout with responding New Jersey officers and has since been charged with five counts of attempted murder of a law enforcement official.

The following day federal prosecutors announced charges in relation to the New York City blast. The federal criminal complaint stated Rahami was charged with use of a weapon of mass destruction, bombings of place of public use and public transportation system, attempted destruction of property by means of fire or explosive, and use of a destructive device during and furtherance of a crime of violence.

For the New Jersey attacks, Rahami was charged with two counts of using and attempting to use weapons of mass destruction.

Anyone with information regarding the location of the two men, can call the FBI’s tip line at (800) CALL-FBI (800-225-5324), the local FBI office or the nearest U.S. embassy or consulate.