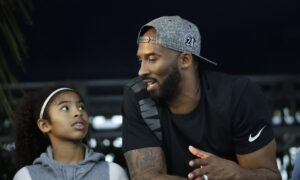 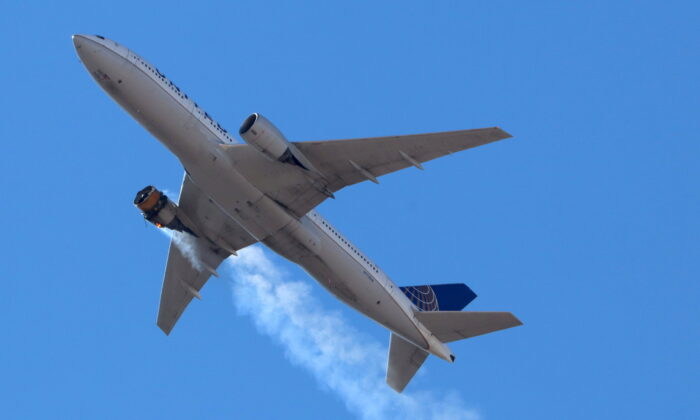 United Airlines flight UA328 returns to Denver International Airport with its starboard engine on fire after it called a Mayday alert, over Denver, Colo., on Feb. 20, 2021. (Hayden Smith/@speedbird5280 via Reuters)
US News

A federal agency in charge of travel safety said Sunday preliminary findings of a probe into the engine that exploded last week revealed two fan blades were fractured.

A Pratt & Whitney PW4077 engine on a United Airlines-owned Boing 777-200 exploded shortly after the plane took off Saturday from Denver International Airport.

Pilots were able to maneuver the flight to safety with no injuries or deaths, but the sudden detonation has caused widespread concern and immediately triggered an investigation.

The National Transportation Safety Board said that early findings show the Pratt & Whitney had two fractured fan blades. One was fractured near the root and an adjacent blade was fractured about mid-span.

A portion of one blade was embedded in the containment ring.

The remainder of the blades were damaged at the tips and leading edges.

In addition, the inlet and cowling, which covers the engine, were separated from the engine.

Despite the detonation, the plane suffered only minor damage, investigators found.

The early findings are subject to change as the investigation progresses and, as such, no conclusions about the explosion should be drawn from them, the board stressed. Analysis of what happened, along with conclusions and a probable cause, will come later.

“Investigators continue to examine the engine, airplane, and the photographs and video taken by passengers aboard United flight 328,” the board said.

Workers at the board’s laboratory in Washington are analyzing the cockpit voice recorder and flight data recorder.

The board is being assisted in the probe by the Federal Aviation Administration (FAA), United Airlines, Boeing, Pratt & Whitney, the Air Line Pilots Association, and the Independent Brotherhood of Teamsters.

The FAA said Sunday that it was issuing an emergency directive mandating immediate inspections of Boing 777s in the wake of the explosion, which will likely mean some of the machines will be removed from service.

“Based on the initial information, we concluded that the inspection interval should be stepped up for the hollow fan blades that are unique to this model of engine,” FAA Director Steve Dickson said in a statement.

Boing, meanwhile, recommended airlines ground all 777s that have the same engine as the one on Saturday’s flight “until the FAA identifies the appropriate inspection protocol.”

Boeing said it supported the FAA’s action, as well as a similar decision by the Japan Civil Aviation Bureau.

“We are working with these regulators as they take actions while these planes are on the ground and further inspections are conducted by Pratt & Whitney,” the company said.