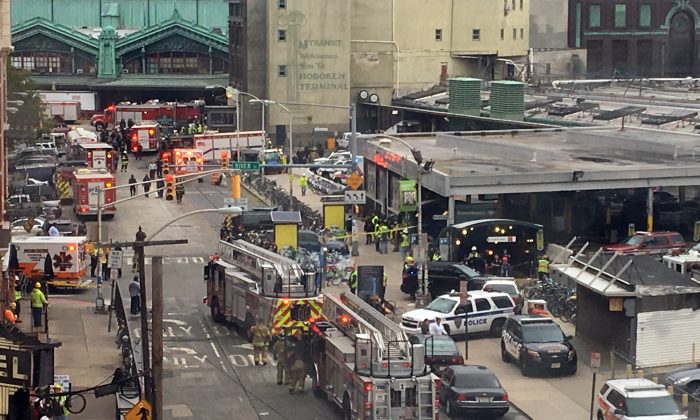 Emergency personnel arrive at the scene of a train crash in Hoboken, N.J. on Thursday, Sept. 29, 2016. A commuter train barreled into the New Jersey rail station during the Thursday morning rush hour, causing serious damage. (AP Photo/Joe Epstein)
US

HOBOKEN, N.J.—Federal investigators trying to figure out the cause of the deadly rail crash at the Hoboken station questioned the engineer Friday and hoped to lift clues from the train’s black box recorders, though one of the devices was proving difficult to extract from the twisted wreckage.

Thomas Gallagher answered investigators’ questions and was cooperative, according to a government official who was not authorized to discuss the case and spoke on condition of anonymity. The official would not disclose what Gallagher said.

The official also said Gallagher’s blood and urine were sent for testing — standard procedure after an accident — but the results were not yet available.

Gallagher’s NJ Transit commuter train crashed through a steel-and-concrete bumper and hurtled into the waiting area at the Hoboken terminal Thursday morning, killing a woman on the platform and injuring more than 100 other people.

Gallagher, 48, a NJ Transit engineer for about 18 years, was pulled from the wreckage, treated at a hospital and released.

“The one thing we know for sure is that the train came into the station too fast. Why that is, we don’t know,” New Jersey Gov. Chris Christie said. “Was it error by the engineer? Did he have some type of medical emergency or circumstance that rendered him unable to control the train? Was there some equipment failure that didn’t allow him to slow down?”

National Transportation Safety Board investigators were examining the event recorder taken from the locomotive at the rear of the train, NTSB Vice Chairman T. Bella Dinh-Zarr said. The event recorder contains speed and braking information.

But authorities struggled to extract a recorder from the forward-facing video camera in the train’s mangled first car without damaging the device. Authorities used heavy equipment to try to pull a collapsed section of the waiting area roof off the car and get to the recorder.

Some witnesses said they didn’t hear or feel the brakes being applied before the crash. Authorities would not estimate how fast the train was going before it hit the bumper at the end of its track. But the speed limit into the station is 10 mph.

Bumpers are meant mainly to denote the end of a track, not to stop a fast-moving train, said David B. Clarke, who runs the Center for Transportation Research at the University of Tennessee, Knoxville.

Some bumpers are designed to absorb the impact if a slow-moving car gets loose, but the maximum speed one can handle can be as low as 5 mph in some cases, he said. Trains are supposed to stop well clear of bumpers, Clarke said.

Falling debris from the crash killed 34-year-old Fabiola Bittar de Kroon, who had just dropped her toddler daughter off at day care before rushing to catch a train. Sixteen of the injured remained hospitalized, two in intensive care.

More than 100,000 people use NJ Transit to commute from New Jersey to New York City each day. The NJ Transit portion of the Hoboken station remained closed Friday, slowing the morning commute.

The wreck has raised questions of whether technology called positive train control would have made a difference if NJ Transit had installed it. The GPS-based system is designed to prevent accidents by automatically slowing or stopping trains that are going too fast.

Railroads are under government orders to install positive train control by the end of 2018. The deadline has been repeatedly extended at the industry’s request.