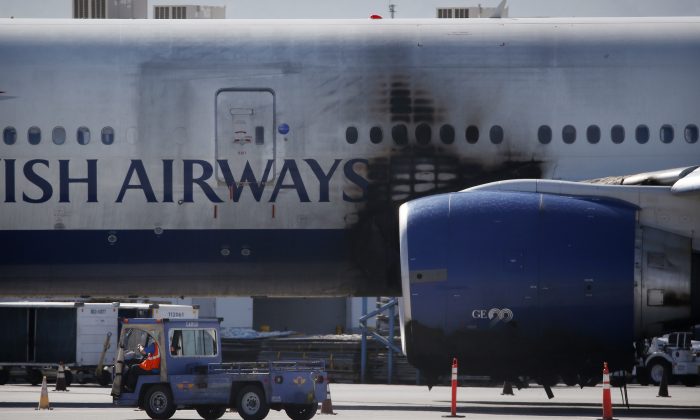 Investigators in Las Vegas Seek Cause of Plane’s Engine Fire

LAS VEGAS—Federal safety investigators are trying to determine what caused a British airliner’s left engine to burst into flames as it hurtled down a Las Vegas runway, forcing the pilot to abort the takeoff and passengers to flee the burning plane.

Passengers on the London-bound Flight 2276 reported hearing two loud booms Tuesday before flames and the smell of burning rubber sent them dashing to the inflatable evacuation slides, unsure if they were fleeing a bomb or a blown tire.

“Everyone was screaming, ‘Just keep on running,'” said Karen Bravo, a 60-year-old who abandoned the flip-flops she had taken off minutes before to settle in for the 10-hour flight to Gatwick Airport south of London.

When the running stopped and they turned around, there was nothing but black smoke and flames.

As bad as it looked, it could have been much worse. The British Airways 777-200 was filled with fuel for its lengthy journey but didn’t explode. The flicking flames also didn’t breach the cabin, which can hold up to 275 souls but, on this day, held half as many.

“Mayday, mayday,” said the calm, deliberate voice from the plane’s cockpit to the air traffic control tower requesting help with a fire.

The 157 passengers and 13 crew members escaped as fire crews sprayed foam to push the flames away from those fleeing. Injuries were mostly bumps, bruises and scrapes from sliding out an airplane. The 27 people sent to a local hospital, including the 13 crew members, were treated and released the same day, according to Clark County Fire officials.

The dramatic scene played out in five short minutes.

Flawless is how fire officials and airline observers described the response, a result of daily training that can make a blown engine on a Boeing 777 feel routine.

The crippled aircraft was towed to an airport apron, away from terminals, and two runways that had been closed to arrivals on Tuesday were both open by midnight.

No one knows what caused the fire but investigators have arrived in Las Vegas to find out.

Airport director Rosemary Vassiliadis said Wednesday there was “no indication whatsoever” that terrorism played a role.

The plane had two GE90 engines made by GE Aviation.

The large plane was built in 1998 and registered to British Airways a year later. By the end of 2013, it had been flown for 76,618 hours, according to the British Civil Aviation Authority.

That’s about average for that model of aircraft, said John Cox, an aviation safety consultant and a former captain with U.S. Airways for 23 years. “It has a remarkably good safety record,” he said of the 777 model first introduced in 1994.

“This is a highly unusual event, to have an engine failure of this magnitude,” he said.

Cox said the plane’s crew and responding firefighters did exactly what was expected.

“This is one of the most practiced emergencies that pilots train for,” he said.

Las Vegas’ airport is the ninth-busiest in the U.S. and had nearly 43 million passengers last year. The airport has been taking steps to accommodate more international travelers seeking direct flights to Europe and Asia, including adding new gates to accommodate wide-body double-decker jets.