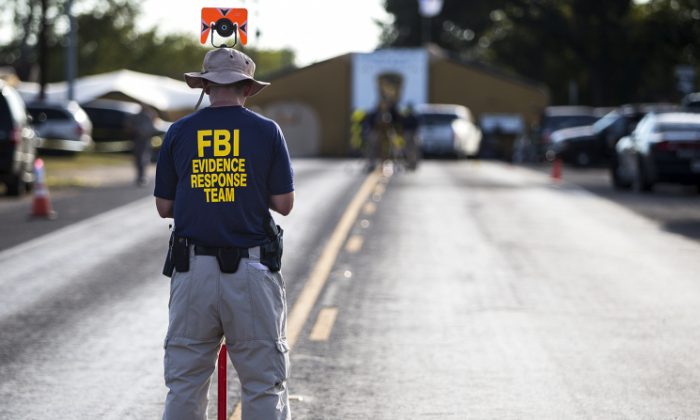 A member of the FBI's Evidence Response Team works on the crime scene of the mass shooting at the First Baptist Church in Sutherland Springs, Texas, on Monday, Nov. 6, 2017. (Nick Wagner/Austin American-Statesman via AP)
US News

Texas authorities recovered the cellphone used by the suspected church gunman to call his father after he massacred 26 people on Sunday, Nov. 5. But they can’t get into the device because it is encrypted.

The phone has been sent to the FBI Academy in Quantico in Virginia, according to Christopher Combs, FBI special agent in charge of the case.

“Unfortunately, at this point in time, we are unable to get into that phone,” Combs said, according to Fox News.

Combs would not specify the type of phone the shooter used but stressed the growing burden encrypted devices pose to criminal investigators.

“Law enforcement, whether it’s at the state, local or federal level, is increasingly not able to get into these phones,” Combs said.

Earlier on Tuesday, The Associated Press reported that the suspected gunman, Devin Patrick Kelley, had been confined at a mental health facility in 2012 and briefly escaped.

An El Paso, Texas, police incident report states the Devin Patrick Kelley was stationed at Holloman Air Force Base when he was caught trying to bring firearms onto the base.

The report obtained by KPRC-TV in Houston also says Kelley, 21 at the time, had made death threats against superior officers.

He was committed to a mental health facility in Santa Teresa, New Mexico, but at some point escaped and was later found by police at a bus station in downtown El Paso in June 2012.

The Air Force released a statement earlier that it had failed to report the suspect’s domestic violence conviction to the FBI.

Under Pentagon rules, criminal convictions of military personnel like assault should be shared with the FBI for its National Criminal Information Center database.

Kelley was convicted of assault against his wife and stepson in an Air Force court-martial in 2012.

The victims killed on Sunday included a pregnant woman with her unborn child, an 18-month-old toddler, and 8 members of an extended family.

One man lost his three children, a pregnant wife, and parents.

Authorities said Kelley had been involved in a domestic dispute with the parents of his second wife, whom he married in 2014, and had sent threatening text messages to his mother-in-law before the shooting.

“We have some indication of what the conflict was between the family,” Martin told a Tuesday press conference. “But there’s still a lot of work to be done.”

Although Kelley’s in-laws occasionally attended services at First Baptist, they were not there on Sunday.

Since Kelley’s cellphone was sent to the FBI’s crime lab at Quantico, Virginia, specialists have been unable to get into it to see if it holds details on the cause of his attack, said Christopher Combs, the FBI’s special agent in charge in San Antonio.

“We are working very hard to get into the phone and that will continue until we find an answer,” Combs told the Tuesday press conference.