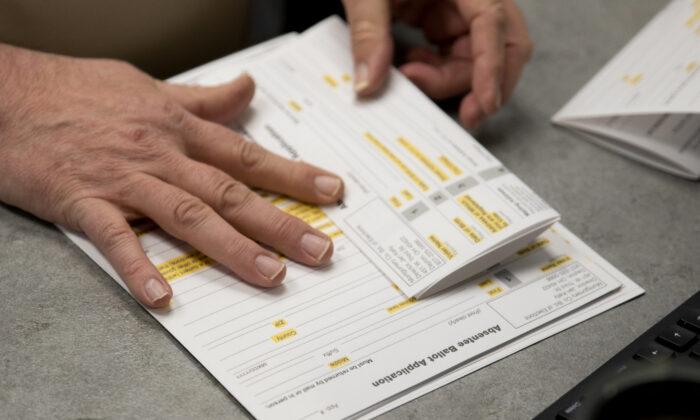 A citizen investigator says he has discovered thousands of inaccuracies in the Racine County, Wisconsin, municipal voter rolls.

The latest allegations come on the heels of findings announced earlier this week by another investigator that security vulnerabilities exist in the statewide online process of applying for absentee ballots—findings that prompted Racine County Sheriff Christopher Schmaling to call for an immediate suspension of part of Wisconsin’s absentee voter process pending a statewide investigation.

Just days before the Aug. 9 primary election, it was discovered that any individual can go online and, using only a date of birth, can order an absentee ballot for any registered voter in the state and direct the ballot to be sent to an address other than that of the person who requested it.

In a July 28 press release responding to the claim, the Wisconsin Elections Commission (WEC) stated, “There is no indication of any vulnerability with the MyVote application.”

Yet, small tests of the system conducted by individuals revealed that at least half a dozen absentee ballots, including that of a prominent local official, were applied for by someone else and delivered to unrelated third parties.

On July 31, 2022, Peter Bernegger, a cyber analyst, sent a package of data documenting the voter roll problems he found to 13 municipal clerks in Racine County, including a letter asking them what is being done about it.

Bernegger told The Epoch Times in an Aug. 1 phone interview, “It is the duty of local and state election officials to ensure voter registration lists are accurate and updated regularly.

“Our analysis shows this is not the case in the municipalities of Racine County.”

He said the numerous problems he discovered call for correction in order to prevent their potential exploitation by nefarious actors seeking to influence the outcome of an election.

In his letter to the clerks, Bernegger wrote, “I would be happy to help you and your staff with this critically important effort to protect our elections. There are local volunteers in Racine County willing to help also.”

As of press time, Bernegger said he had not heard from any of the clerks.

The Epoch Times has obtained a copy of his findings.

Bernegger’s electronic cross-checking found 531 registered voters moved out of Racine County two or more months before the November 2020 election, according to the USPS—yet voted using their old address.

“Some of these folks voted absentee and some voted in person,” he said.

Bernegger found that 636 people voted from registered addresses that were listed as vacant by the postal service. “The addresses are not valid; hence the electors are illegally registered,” he wrote.

In 421 instances, the person’s listed primary address is a number that falls beyond the range available for that street or road.

His examination of the rolls showed 220 people have zip codes that do not match USPS zip codes.

Street addresses listed on the rolls for 412 people had errors in the street name.

Thirteen people are listed on the rolls without a first name.

“If there is no first name, the system should not accept the registration,” Bernegger said.

The Racine County clerk’s office and the office of the clerk of the city of Racine did not respond to requests by The Epoch Times for comment as of press time.

According to Bernegger, in Racine County, there are 111,665 voters currently listed on the rolls as active and 136,432 listed as inactive, including 24,890 deceased.

The population of Racine County is just under 200,000.

Bernegger said there are 632,599 inactive voters listed as deceased on the statewide voter roll.

In his letter, Bernegger quoted Wisconsin Supreme Court Justice Rebecca Grassl Bradley, who opined on the perils of failing to continually purge the state’s voter rolls.

“Removing ineligible voters from this state’s registration list is paramount if Wisconsin takes seriously its obligation to ensure fair and honest elections.”

WEC explained on its website that the inactive voters are not deleted because the list is a historical public record, and it can be used to assist election workers as a historical reference in making determinations.

Bernegger told The Epoch Times in a phone interview, “Since 2016 Wisconsin has had a contract with the Electronic Registration Information Center known as ERIC.

Both the registration information center and the Wisconsin Elections Commission are being paid by the taxpayers of Wisconsin to keep the rolls clean and accurate.

“It appears that in Racine County they have done very little to keep them in acceptable order.

“This ought to be a concern for every citizen regardless of political party,” he said.

“I filed a public information request for any and all reports provided to WEC by ERIC from Jan. 1 through Nov. 3, 2020. I received notice of exactly one report which contained nothing but the names of many thousands of people who were eligible but not yet registered to vote in Wisconsin,” said Bernegger.

“The irony of a private citizen being able to find the irregularities and inaccuracies on the voter rolls in Racine County, while well-funded authorities seem to be blind to them, is too much.”

The Electronic Registration Information Center’s website explains that under the terms of its agreement with the states, member states contact potentially eligible but unregistered voters with instructions on how to register.

“ERIC members contact potential voters at least every two years, ahead of any federal general election,” the website said.

The website says that each member state must, “at a minimum” send to ERIC its voter registration and motor vehicle licensee data, “including names, addresses, date-of-birth, and the last four digits of people’s social security number.”

Date of birth and social security numbers are encrypted.

It currently provides its services to 31 states.

In 2019, 69,000 names of Wisconsin voters who likely moved were reported, but the Wisconsin Supreme Court ruled that the state elections commission was not obligated to remove them, so they remained on the voter rolls through the 2020 presidential election.

WEC said in a statement that it was the local clerks who were responsible for removing move-aways from the voter rolls.

In a separate investigation, Bernegger filed suit asking for a court order to allow him access to election records from the city of Milwaukee, which he says has largely “stonewalled” him in his quest.

The case is still pending.