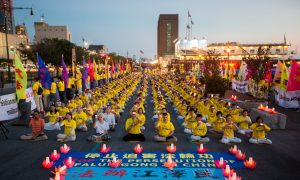 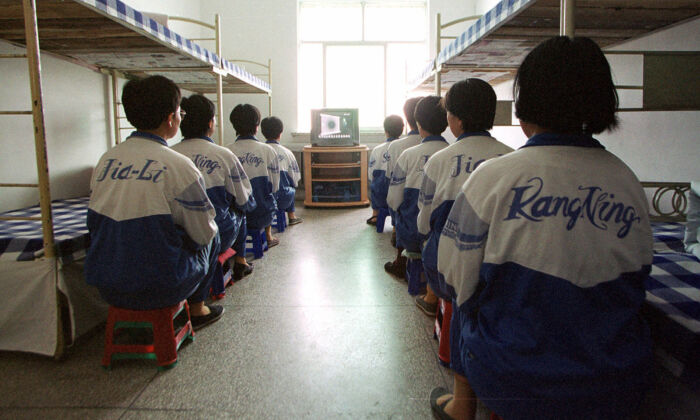 Falun Dafa practitioners are shown in the Masanjia labour camp watching a video meant to “re-educate” them during a propaganda tour arranged by the camp authorities on May 22, 2001. (AP Photo/John Leicester)
Southern California

In the last 20 years, millions of practitioners of the meditation group Falun Gong, also known Falun Dafa, have been illegally detained, tortured, or killed in China because they refused to give up their faith. According to incomplete statistics provided to the website Minghui.com, since the Chinese Communist Party (CCP) suddenly began to persecute Falun Gong on July 20, 1999, at least 4,304 Falun Gong practitioners have been persecuted to death.

Bill Melugin, a journalist for Fox 11 in Los Angeles, had never heard of Falun Gong before. However, a recent assignment opened his eyes to the suppression and persecution of the CCP against the peaceful spiritual practice, which believes in the principles of truthfulness, compassion, and tolerance.

In his investigation, Melugin found there was little in-depth reporting on the issue produced by most television news stations in the United States.

At 10 p.m. on Monday, May 20, Fox 11 will broadcast a special investigative report on the persecution with Melukin as the main reporter.

The film is based on the story of two Chinese sisters. One of the sisters, Wang Yifei, who now lives in California, has spent the last 18 years attempting to retrieve her dead sister’s body from China and bring justice to her sister’s memory amidst a cruel persecution by the CCP of her family and friends.

Her sister, Wang Kefei—a former staff member of the Changchun Agricultural Bank—died as a result of brutal torture when she was imprisoned in a women’s labor camp in Jilin Province.

On Friday, May 17, Melukin and editing engineer Tony Ruiz were making final changes to the upcoming film called “Sister’s Salvation.” Nearly three months of investigation and interviews were brought together for the film.

Yu Ming, an entrepreneur in Shenyang, Liaoning Province, was able to secretly record video footage inside Chinese labor camps with a miniature camera and bring the video overseas, providing it to the news media.

Yu said he was a successful businessman before the persecution of Falun Gong. He employed more than 100 people and had a happy family.

In the last 20 years, Yu himself has spent 12 years in the CCP’s prisons and labor camps. He was subjected to electric shocks, cages, and other forms of torture that nearly killed him.

While his treatment was horrendous, Yu saw that many other Falun Gong practitioners were also cruelly persecuted. He decided to make a very bold move and attempt to record these cruel acts to show the world. He carefully took a pinhole camera into various labor camps and prisons. Since 2008, he has captured a large number of labor camp detainees and imprisoned Falun Gong practitioners on camera.

On Jan. 27, Yu took his video recordings and fled across the border to Thailand, eventually arriving in San Francisco. Today, his greatest wish is to publicize the cruelty of communist China’s secret prisons.

When the image of one of these tortured Falun Gong practitioners appeared on the screen in a Los Angeles Fox 11 studio, it was difficult for the journalists to watch. However, Melukin said, “This is reality.”

The special program will premiere on Fox 11 in Los Angeles at 10 p.m. on May 20, and it will also livestream on foxla.com.