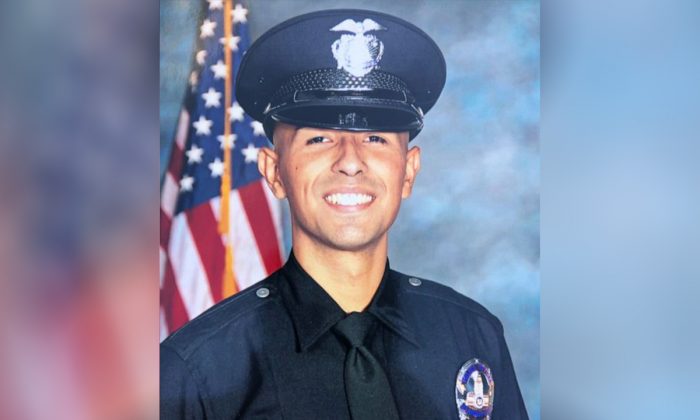 An altercation at a Los Angeles taco stand early Saturday morning resulted in the fatal shooting of an off-duty police officer.

24-year-old Juan Diaz of the LAPD and one other victim were found shot to death at Avenue 26 & Humbolt Street around 1 a.m., reported ABC.

“It is with a heavy heart that we can confirm the off-duty LAPD Officer has passed away as a result of the shooting. Our thoughts and prayers are with his family and loved ones,” said a tweet from the LAPD.

Our subsequent investigation revealed one of those victims to be an off-duty LAPD officer. We are not revealing the identity of our employee until we are able to notify his family members. We will provide more details as they become available.

According to ABC News, the officer was gunned down while approaching a group of young male graffiti artists.

Diaz, who had been with the LAPD for only two years, was said to have been eating at a taco stand with his girlfriend and her two brothers when he noticed the group defacing a property.

As he approached the young men, telling them to stop, one of the men allegedly pulled out a gun and started threatening Diaz.

As Diaz tried to retreat, the young man opened fire killing Diaz and injuring one of his girlfriend’s brothers.

According to Eye Witness News 7, an LAPD motorcycle officer was flagged down and responded to the scene.

Mayor Eric Garcetti said in a statement, “Words cannot match the depth of sorrow that Angelenos are feeling today.

Our hearts are with Officer Juan Diaz’s family and friends. They are experiencing a loss that no one should have to suffer. My promise is that we will hold them close — and never tire until we find and prosecute the criminals responsible. https://t.co/8kQpSqw9tB

“The senseless murder of Officer Juan Diaz is a shocking reminder of the dangers that LAPD officers face every moment they wear the badge, and the absolute courage and selflessness with which they uphold the oath each day.”

“Our hearts are with Officer Diaz’s family and friends. They are experiencing a loss that no one should have to suffer, under circumstances that outrage us all.”

“My promise is that we will hold them close, stand with them every step of the way — and never tire until we find and prosecute the vicious criminals responsible for this horrific tragedy.”

“I also want every Angeleno to be mindful of Officer Diaz’s brothers and sisters in uniform — they are coping with an unthinkable tragedy, while carrying forward a mission that drove him every day of his courageous career: protecting and serving our people with the honor, valor, and integrity befitting the memory of a fallen hero.”

Tonight we gathered to honor a man who dedicated himself to our city—A man whose passion was LA. There were hugs & tears—but we held our heads high as we paid tribute to his dedication to something greater than himself. Tonight our HQ Facility is proud to have Juan front & center pic.twitter.com/9mRZVZfyQV

Los Angeles Police Chief Michel Moore has referred to the shooting as an “act of senseless violence.”

A vigil for Diaz was held Saturday at the LAPD headquarters where family, friends, and fellow officers gathered to commemorate the fallen officer.

“Tonight we gathered to honor a man who dedicated himself to our city — A man whose passion was LA,” said the LAPD in a tweet.

Milwaukee Officer Killed While Serving Warrant Has Been Identified, Suspect in Custody

“There were hugs & tears—but we held our heads high as we paid tribute to his dedication to something greater than himself. Tonight our HQ Facility is proud to have Juan front & center.”

“He grew up in a bad neighborhood, infested with gangs, yet he led a good life,” said Sgt. Manuel Hernandez, who was his police academy training officer.

“What we mainly want is for all of you guys to remember Juan for the goofball he was, the personality he was, always made someone smile,” said Diaz’s sister, Anahi Diaz.

Authorities also haven’t released any information regarding possible suspects and the investigation is ongoing.