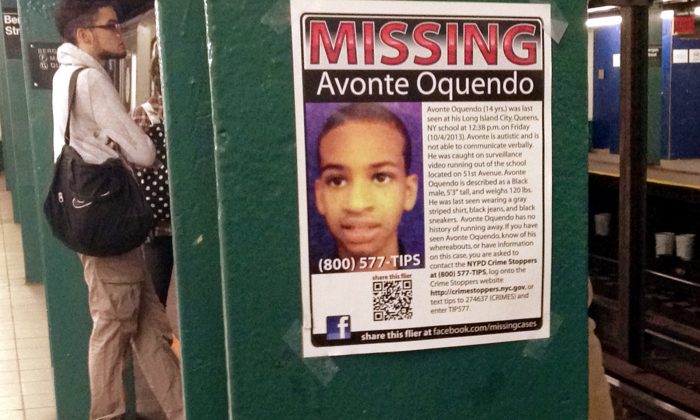 A missing child poster asking for help in finding Avonte Oquendo is displayed at a subway station in Brooklyn. (Barbara Woike/AP)
New York

NEW YORK—The New York City School District released results of an investigation into the disappearance of 14-year-old Avonte Oquendo, an autistic boy, who ran out of school on Oct. 4 and was found dead two months later.

The District’s Special Commissioner of Investigation (SCI) Richard J. Condon presented a report on the investigation to Education Chancellor Carmen Fariña. The report was also sent to the state’s Education Department and to Queens County District Attorney Richard A. Brown “for whatever action he deems appropriate.”

Through footage from security cameras and personal accounts by school staff, SCI was able to piece together details that led to the tragedy. The SCI report reconstructed events immediately before and after the boy’s disappearance.

It was noted he never tried to run away. In fact, only if he was told it was all right, would he eat his lunch or go to the bathroom, recalled his former teacher, Erika Olsen. And in November 2012 he had his Individual Education Program (IEP) updated.

Every special needs student needs an IEP, which is reviewed every year. The school staff creates each student’s program, with input from a therapist and the student’s parents. Nothing in Avonte’s IEP indicated he was at risk of running away. Both his mother and grandmother signed the boy’s IEP.

In August 2013 he graduated from P4Q and in September entered the Riverview School (Q277), another school for special needs students in Long Island City. Julie Murray became his classroom teacher and he was placed in a “12-to-3” setting—one teacher and two paraprofessionals for a class of 12 students.

In September Murray created a question form and sent it to parents so she could learn more about her students. Avonte’s mother, Vanessa Fontaine, commented on the form: “Safety concerns: Please make sure you keep an eye out. He likes to run. Needs a supervisor; will leave the building.”

The school’s principal, Susan McNulty, said teachers were told to submit any paperwork not issued by the school for an approval by the administration. But Murray didn’t remember that. She never told the administration about the form she sent to parents. She did inform the two paraprofessionals in Avonte’s class to be aware that he might run away.

One of the paraprofessionals, Janeth Montoya, said she would especially walk beside Avonte during class transitions. But he never tried to run away, she said.

Around noon on Oct. 4, Avonte finished his morning classes and was escorted from his second floor classroom to the fifth floor cafeteria for lunch. He finished eating, and at 12:34 p.m. lined up with his schoolmates to be escorted to the Technology Room on the second floor.

Things weren’t going smoothly that day. When they entered the stairwell, one of the students started to run down the stairs. Glover started to chase him and seven other students followed Glover, including Avonte.

Meanwhile, Dooley was taking care of another student who was acting aggressively before lunch and now was walking slowly. Dooley thought Smalls was nearby, so he stayed behind with the student and a few other students. He couldn’t see the group with Glover.

Smalls had her own problems. Another student started to act up. Smalls noticed his hands were dirty, so she took him back to the cafeteria to help him clean his hands.

When Glover came off the stairway on the second floor at 12:37:02, he had caught up with the running student, but now only six students were following him. Glover didn’t notice that Avonte continued down the stairwell to the first floor.

By 12:37:40, when Dooley reached the second floor, Avonte was already out of sight. He was running back and forth through the first floor hallway between the stairwell and the lobby.

School Safety Agent (SSA) Bernadette Perez was on duty in the lobby at that time. She remembered calling out “excuse me” twice, when she saw the boy running back and forth, but he did not respond. She didn’t know he was autistic; she didn’t know he was Avonte. Perez couldn’t chase after him, since the other SSA was on a break at that time and Perez couldn’t leave her post unattended.

At that moment, a father was taking his ill daughter out of school. When they entered the lobby, his daughter ran to give Perez a hug. The father remembered that a boy walked past him at that time, but the father wasn’t paying much attention and didn’t stop him. Perez, distracted by the sick child, didn’t stop the boy either.

That boy was Avonte Oquendo. At 12:38 p.m. he ran down a hallway and out of the school.

The Man Who Left the Door Open

An additional camera recording surfaced in January showing a man stepping out of the school’s first floor elevator at 12:07 p.m., Oct. 4. He walked down the hallway and exited the building, leaving the door open.

SSA Perez couldn’t see the open door from her post. When she learned there was a student missing, she looked around and closed the open door, but it was already too late.

SCI investigators reviewed the footage with the school staff and reached out to contractors, who had workers in the building at that time. No one recognized the man.

“No one could identify the male who left the door open,” the report concludes.

Despite massive search efforts, only Avonte’s remains were found in January, washed ashore by the East River in the northern part of Queens.

His funeral was held on Jan. 25 at the Church of Saint Joseph in Manhattan.