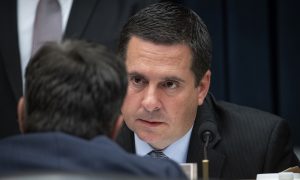 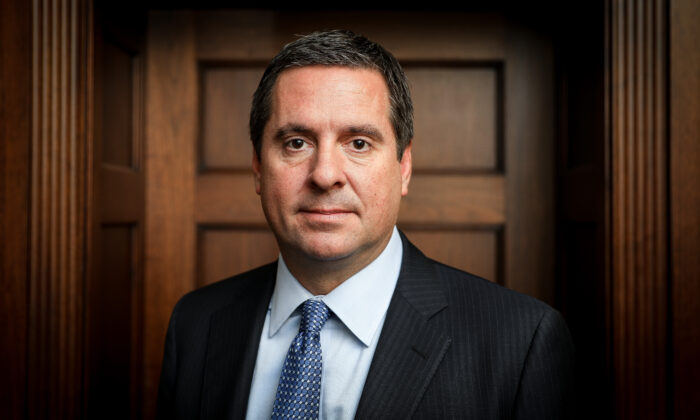 The investigation into the 2016 presidential campaign of then-candidate Donald Trump started earlier than the official date listed in the final report by special counsel Robert Mueller, according to Rep. Devin Nunes (R-Calif.), the ranking Republican on the House Intelligence Committee.

According to the Mueller report, the FBI opened the counterintelligence investigation of the Trump campaign on July 31, 2016. But Nunes told The Epoch Times that “the FBI investigation did not begin at the end of July.”

In a wide-ranging interview, Nunes also confirmed that the FBI didn’t appropriately brief the congressional “Gang of Eight”—the House speaker and minority leader, the Senate majority and minority leaders, and the chairmen and ranking members of the House and Senate intelligence committees—about its probe of the campaign and that the intelligence community continued scooping up Trump’s communications even after Inauguration Day.

Nunes says that the surveillance of the Trump campaign is the greatest political scandal in modern American history, and in a newly published book about Nunes’s work to expose the spying, author Lee Smith arrived at the same conclusion. Nunes emphasized that the media played a major role in the scandal by disseminating opposition research at least partly funded by the campaign of Hillary Clinton.

At the core of the scandal is the Foreign Intelligence Surveillance Act (FISA) warrant the FBI obtained to spy on Trump campaign associate Carter Page. The bureau used an unverified dossier of opposition research in the FISA warrant application, without mentioning that the dossier was funded by Clinton’s campaign and the Democratic National Committee (DNC).

Clinton and the DNC paid for the dossier through a law firm, Perkins Coie, which, in turn, hired Fusion GPS, a political opposition research firm. Fusion GPS hired former British spy Christopher Steele, the author of the dossier, who paid second- and thirdhand sources with ties to the Kremlin for the claims in the dossier.

The FBI paid Steele as a confidential human source but cut ties with him after learning that he was leaking to the media. Notably, the FISA application cites a media article to buttress Steele’s claims, even though the article appears to have resulted from a leak by Steele himself.

“So it’s clear all of this was being done with the help of the media, and then being plugged into the FBI,” Nunes said.

“And the only question that you really have is, at what point did this whole Clinton campaign operation with Fusion GPS, what time did it merge with the FBI investigation? Because we know that the FBI investigation did not begin at the end of July and that’s really what [U.S. Attorney John] Durham needs to get to the bottom of and then figure out who was responsible for all of it.”

Attorney General William Barr appointed Durham earlier this year to investigate the origins of the FBI’s probe of the Trump campaign.

The Mueller report states that the FBI opened its counterintelligence investigation of the Trump campaign on July 31, 2016, after learning that George Papadopoulos, a Trump campaign adviser, mentioned to a “representative of a foreign government” that Russia had damaging information on Clinton.

The assertion by Nunes that the FBI’s investigation started earlier than that could mean that either FBI officials were improperly probing the Trump campaign without formally opening an investigation or that another probe predated Crossfire Hurricane, the code name for the operation that FBI agent Peter Strzok opened and approved on July 31 of that year.

Three weeks prior, at the FBI’s direction, undercover informant Stefan Halper met with Page, the Trump campaign associate, at a symposium at Cambridge University, and they remained in touch for several months. The New York Times first reported that Halper was acting on instructions from the FBI.

Before opening a full investigation, FBI agents can open an assessment, which doesn’t require a “particular factual prediction.” Nevertheless, the basis for an assessment “cannot be arbitrary or groundless speculation,” the DIOG states. During the assessment, the agents are authorized to collect publicly available information, search FBI and Justice Department records, conduct clarifying interviews, and accept voluntary information from private entities. Tasking an informant to interact with witnesses, as was done with Halper, isn’t one of the authorized activities.

During Mueller’s testimony in late July this year, Nunes asked the special counsel whether his team interviewed Steven Schrage, the man who invited Page to the symposium where Page met Halper.

“Those areas, I am going to stay away from,” Mueller replied.

Nunes told The Epoch Times that he’s still investigating the issues tied to the spying on Trump’s campaign.

“Just last Friday—I’m not going to get into it—but we’ve sent additional followup letters based on our ongoing investigation into FISA abuse and other matters,” Nunes said. “So our investigation continues.”

Nunes confirmed, for the first time, that leaks of the details of the calls between President Trump and the leaders of Mexico and Australia in 2017 were the product of intelligence gathering.

According to Nunes, sources told the House Intelligence Committee that the leaks of the calls between Trump and the foreign leaders were based on intelligence products, prompting Nunes to investigate the issue.

“We knew right away in January that unmasking was occurring. Well, we knew the big one, the major one, was the Flynn transcript that was given out. And then you slowly had the Australian prime minister, you had the Mexican president, plus stories that we were seeing out in the mainstream news media. It was clear that somehow people were getting information from what appeared to be intelligence products,” Nunes said Oct. 28.

“We had some sources that had come to us to tell us that this was happening. So finally, we were able to finally piece it together, and I was able to review it. And then, once I saw what it was, and it was much more than what I expected. And it had nothing to do with Russia.”

Nunes previously revealed, in March 2017, that he had confirmed that the intelligence community incidentally collected the communications of Trump’s transition team and intentionally unmasked the names of individual officials. His comments to The Epoch Times on Oct. 28 show that intelligence gathering on Trump and his associates continued beyond Inauguration Day and appeared in major leaks to the media.

“And then the media had no interest in that. Not only were they never interested in the unmaskings that occurred, they continue to be against it. They said that I did all kinds of things wrong, and they only wanted to know where I got it from. And then they made up a totally phony story about how somehow I was going over to the White House at midnight, which was completely nuts,” Nunes said, referring to disproven allegations that he was coordinating his investigation with the White House.

The Trump administration was subjected to a barrage of leaks beginning on the president’s first day in office. A Senate investigation determined that during Trump’s first 126 days of the Trump administration, leaks flowed at a rate of one per day. Many of the leaks contained information meant to damage or ridicule Trump or his associates. Roughly half of the unauthorized disclosures went to The New York Times and The Washington Post.

The revelation that the intelligence community was surveilling a sitting president is the latest development in the scandal surrounding the spying on Trump’s campaign. The claim by Nunes aligns with reports that Durham has extended the timeline of his criminal investigation to include the early months of Trump’s presidency. Fox News reported earlier this month that the time frame of Durham’s inquiry now extends up until the spring of 2017.

It isn’t known whether Durham is looking into the unmaskings of the president from incidentally collected intelligence. Barr told Congress that he believes spying occurred on the Trump campaign and that he’s looking to determine whether the surveillance was legal and free of improper motivation.

Nunes noted that the media figures who played a role in the scandal have exposed themselves as “activists.” The point is driven home in Smith’s book on Nunes’s work, titled “The Plot Against the President: The True Story of How Congressman Devin Nunes Uncovered the Biggest Political Scandal in U.S. History.”

Smith “shows how corrupt and how involved the media was in all of this. And I think that’s the key. The key part of Lee’s book is that one thing that’s happened through the “Russiagate” hoax is that all the little media rats have run off the ship and they’ve exposed themselves,” Nunes said.

“And so I don’t know that we’re ever going to come back to have a media like we’ve had. … I mean, everybody knew the media was left-wing, but nobody knew that they were actually activists.”