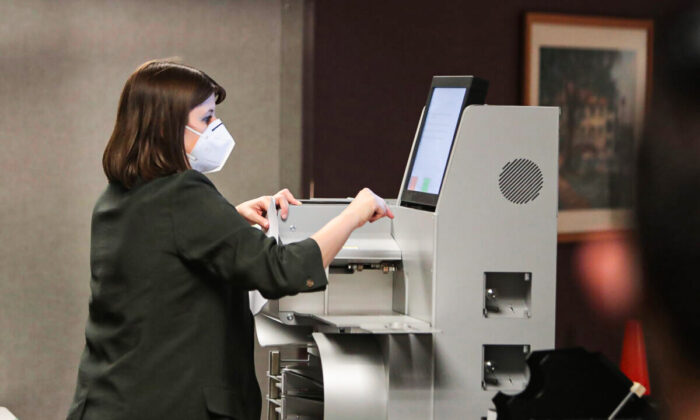 A file photo shows an election worker collecting the count from a voting machine in a file photo of the Nov. 3 election (Scott Olson/Getty Images)
Election Integrity

An investigation into Wisconsin’s 2020 election was paused by Assembly Speaker Robin Vos in an announcement on May 11 amid several legal battles.

Former Supreme Court Justice Michael Gableman was commissioned last year by Vos, a Republican, to probe the election results and allegations of fraud. However, the investigation has faced at least five lawsuits since its inception.

“We are pausing the investigation because it’s not like we’re going to keep looking into things we’ve already discovered,” Vos told the Milwaukee Journal Sentinel, adding that it’s because several lawsuits need to first be settled.

He also told local media that his office has “now been investigating for almost a year and we will potentially restart the investigation if we have the subpoenas served.”

At issue, in particular, are two open records lawsuits brought by a government watchdog group, American Oversight, triggering a March ruling by Dane County Judge Frank Remington ordering Gableman to immediately release some 700 pages of documents. And three other lawsuits pertain to Gableman’s capacity as an investigator to compel testimony from local officials and elections officials in the state after he filed subpoenas against the head of the Wisconsin Elections Commission and the mayors of several major cities.

Although American Oversight describes itself as nonpartisan, it appears to exclusively target Republicans and former President Donald Trump, according to its website, including last year’s audit of Maricopa County, Arizona.

In March, Gableman’s attorney, James Bopp, told the Wisconsin Examiner that the release of documents sought in the lawsuits must be blocked so as to not tip off any individuals who are being investigated, including election officials.

“They would have had months to undermine that investigation, to threaten people in those cities,” Bopp said at the time. “I mean, look at the power that can be brought against an individual person. That’s why we protect whistleblowers, because of the power that can be done to shut people up and prevent people from talking about investigations. They would have had months to do that. Before he eventually served subpoenas on them. They could have destroyed documents, they could have done numerous things to inhibit the investigation. And that is the danger. That is the danger of the release prematurely.”

“This could now drag into 2023. Fighting lawsuits doesn’t happen quickly,” state Rep. Mark Spreitzer, a Democrat, told WKOW. “It’s going to take months, if not into next year and all because Robin Vos and Mike Gableman refuse to interview people in the light of day in front of the public.”

Vos added on May 11 that Gableman’s salary will be cut in half during the pause. Meanwhile, Republican leaders in the state Assembly extended Gableman’s contract.