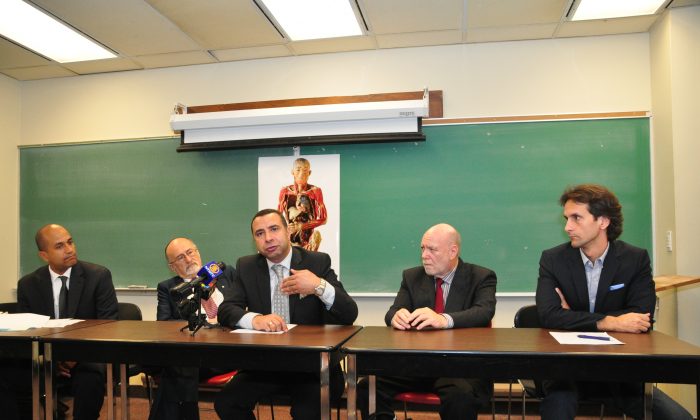 Bodies of prisoners of conscience may be part of display, says group
By Omid Ghoreishi

A Toronto-based human rights group is calling for an investigation into the source of bodies used in an exhibition called “Bodies Revealed” currently showing in Niagara Falls, Ont.

Choose Humanity says the exhibit “may be exploiting the corpses of Chinese citizens, without their consent, who may have been murdered at the hands of Chinese authorities,” and the Ontario Office of the Chief Coroner and the Ontario Provincial Police should look into it.

The exhibit, which started in February and will end in December, displays human bodies in various poses permanently preserved using a technique called plastination. It is put on by Premier Exhibitions, a company specializing in touring exhibitions based in Atlanta.

Choose Humanity’s lawyer Joel Etienne said at a press conference in Toronto on Sept. 9 that an investigation would answer a lot of important questions regarding the bodies, including whether those individuals were murdered or tortured to death.

“There are members of the [Canadian] community with family members who were murdered while in detention for religious or political beliefs,” Etienne said.

“There’s a chance that from DNA analysis … we would be able to find the bodies of relatives of people who are now in Canada.”

He noted that part of the group’s mission is “family reunification.”

Epoch Times has reported that Gu Kailai, the wife of disgraced Chinese politician Bo Xilai, has been linked to the selling of bodies for plastination. Bo was once the mayor of Dalian, where there are several plastination factories. Both Gu and Bo are currently serving prison terms for murder and corruption respectively.

Chinese police are free to declare the bodies of prisoners as “unclaimed” and can dispose of them at their discretion, opening the way for the bodies to be sold to plastination factories for profit.

Adherents of Falun Gong, a spiritual practice that was outlawed by the Chinese regime in 1999 and has since been heavily persecuted, are especially vulnerable to being designated as unclaimed. There are hundreds of thousands of Falun Gong prisoners of conscience in China’s vast prison system at any given time.

Rabbi Reuven Bulka, who also spoke at the press conference, said Canada should follow the example of Seattle, Hawaii, France, and Israel and ban such exhibitions.

Rev. Majed El Shafie, founder of the Toronto-based human rights organization One Free World International, said that beyond questioning the documentation of the bodies, the focus should be on the bigger picture and how things work in China, because the regime can’t be trusted.

According to the book “State Organs: Transplant abuse in China,” prisoners of conscience in China, including Falun Gong adherents and others, are killed for their organs to supply China’s lucrative transplant industry, and state institutions are involved in the abuse.

“We are alarmed at the reality that exists in China that has promoted these kinds of programs and practices,” Sanderson Layng, president of the Canadian Centre for Abuse Awareness, said at the press conference.

Regarding a similar touring exhibit titled “Bodies the Exhibition,” Premier Exhibitions states on its website that it cannot independently verify the bodies are not from people who were incarcerated in Chinese prisons.

“With respect to the human parts, organs, fetuses, and embryos you are viewing, Premier relies solely on the representations of its Chinese partners and cannot independently verify that they do not belong to persons executed while incarcerated in Chinese prisons,” the company says.

Premier was required to include the disclaimer on its website as part of a settlement between the company and the New York State Attorney’s Office in 2008 when “Bodies the Exhibition” was showing in New York, according to the New York Times. Under the settlement, “Bodies the Exhibition” could not obtain new bodies without documentation proving the individual’s identity, the cause of death, and consent for displaying the body.

He said questions about the source of the bodies should be directed to Premier Exhibitions. Requests to Premier for an interview were not responded to by press time.