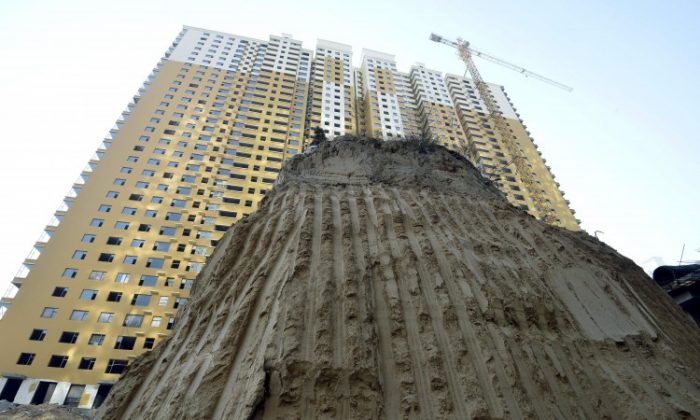 A grave mound 10 meters high at a construction site in a village in Taiyuan, north China's Shanxi Province, Dec. 6. Real estate developers in China are stuck with enormous inventories and no easy way in sight to offload them and avoid losses. (STR/AFP/Getty Images)
China

Supply and demand are miles apart in the Chinese property market. A slowing economy and increased regulations have led to massive amounts of unsold inventory. Some developers might need ten years to sell off their housing stock.

China Times reported that the amount of unsold residential property grew to 320 million square meters (79,000 acres) by the end of October, roughly four times the area of Manhattan. Not only the sheer size, but also the change is worrying: It’s up 19 percent compared to last year’s 270 million square meters (66,718 acres). Based on the current transaction volume the housing stock in some regions would take 10 years to be cleared, according to the report.

Despite home sale increases in first-tier cities such as Beijing and Shanghai, the problem of unsold housing inventories in the whole country persists; it’s worst in the third tier cities that mostly don’t make the headlines.

According to the Shanghai E-House Real Estate Research Institute, third-tier cities have experienced an increase in unsold homes over the course of the last two years. Growth over the last five month has averaged 2 percent, or 27 percent annualized.

Other reports confirm those findings. According to Jinan-based newspaper Qilu Evening News, unsold home inventory has continued to increase in the third-tier city of Handan in Hebei Province. There is a total saleable area of 34 million square meters (8,402 acres) in the market.

The problem is that volume can’t keep up. In 2011 total sales were only 3.55 million square meters (877 acres). If sales continue at this pace and no new homes are added to the market, it would take almost 10 years to absorb the backlog of unsold homes.

Shanxi and Zhejiang provinces have similar ratios of unsold homes to sales per year.

Developers Pay the Price of Overinvestment

During the housing boom, developers used artificially-low interest rates to buy land off local governments and build like there was no tomorrow. The regime had championed such practices with deliberate policies meant to stimulate growth. Now most of the developers are stuck holding record amounts of inventory.

The firms incurred huge debts to build all these houses. Usually, a steady flow of rental or sale income would be more than enough to cover interest and principal payments. If the homes remain in inventory, however, they represent nothing but costs, with maintenance coming on top of interest payments. The effect is to destroy wealth.

This is why developers are scrambling to sell-off their inventories. According to the China Times report, they don’t have a lot of lee-way, as only a slight increase in price will affect the volume of sales.

Nie Meisheng, honorary chairman of the China Real Estate Chamber of Commerce, says: “Developers fear the overhang of unsold houses. Some large-scale developers have as much as 10 billion yuan ($1.6 billion) worth of unsold stock on their books. Normally it is manageable for developers have 15-25 percent of their book value tied up in unsold homes. If the investment exceeds one third of their capital, the companies would likely lose their ability to compete,” he told the China Times.