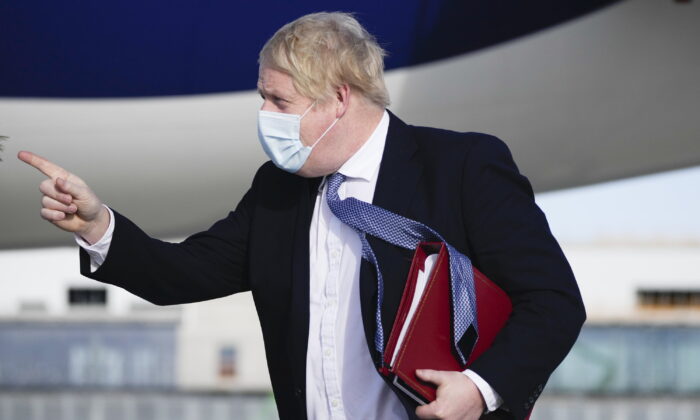 Invasion of Ukraine Would Send Shockwaves to Taiwan: Boris Johnson

A Russian invasion of Ukraine would shock the world, including East Asia and Taiwan, the UK’s Prime Minister Boris Johnson said on Saturday as he rallies for unity at the Munich Security Conference.

Calling the present time a “moment of extreme danger,” Johnson said it’s not entirely clear what is the intention of Russian President Vladimir Putin, but “the omens are grim.”

Despite hopes that “diplomacy and dialogue” may defuse the tension, “we also have to be unflinchingly honest about the situation today, when over 130,000 Russian troops are gathering on the borders of Ukraine, and when more than 100 battalion tactical groups threaten that European country,” he said.

It comes as Russian-backed separatist leaders in eastern Ukraine declared a full military mobilisation, and after U.S. President Joe Biden said he believes Putin has decided to attack Kyiv in the coming days.

Moscow has repeatedly denied the accusations that it plans to invade Ukraine.

He also called on world leaders to unite against the threat.

“If Ukraine is invaded and if Ukraine is overwhelmed, we will witness the destruction of a democratic state, a country that has been free for a generation, with a proud history of elections,” he said.

“And every time that Western ministers have visited Kyiv, we’ve assured the people of Ukraine and their leaders that we stand four-square behind their sovereignty and independence.”

Jonnson said those words will seem “hollow,” “meaningless,” and “insulting” if the West looks away when Ukraine’s sovereignty and independence are imperilled.

“If Ukraine is invaded, the shock will echo around the world, and those echoes will be heard in East Asia and they will be heard in Taiwan,” as well as in Japan and Australia, he said, adding that the risk is “people will draw the conclusion that aggression pays and that might is right.”

He urged the leaders not to “permit a new Yalta or a new division of our continent into spheres of influence.”

The 1945 Yalta Conference, where the United States, the United Kingdom, and the Soviet Union discussed the postwar reorganization of Germany and Europe, preluded the Cold War between the capitalist Western Bloc and the Communist Eastern Bloc.

Johnson warned that Russian aggression won’t succeed in pushing NATO back, but will only draw further reinforcement to the alliance’s eastern flank.

Johnson stressed that NATO is “peaceful and defensive” in nature, and argued that its increased presence in East Europe in recent years was in response to Putin’s provocation.

Johnson added that if Russia chooses to invade Ukraine, “we at this conference should be in no doubt that it is in our collective interest that Russia should ultimately fail and be seen to fail.”