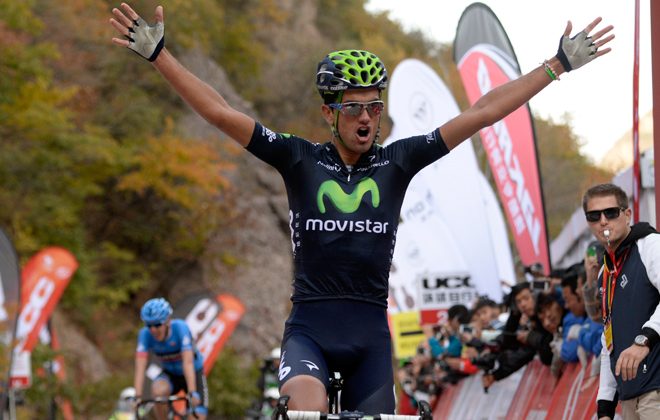 Movistar’s Beñat Intxausti raises his arms in triumph as he crosses the finish line to win Stage Four of the 2013 Tour of Beijing. (tourofbeijing.com)
Cycling

Movistar’s Beñat Intxausti attacked two kilometers from the summit finish of Stage Four of the Tour of Beijing, winning the stage, the red jersey, and likely the whole race.

Intxuasti, knowing that time bonuses might be the deciding factor, joined an early breakaway and gained three seconds bonus in the first intermediate sprint, then dropped back to the main peloton to wait for the final climb of the 150-km stage.

Intxuasti followed the peloton over the first three climbs of the stage, a cat One, a Cat Two, and a Cat Three ascent, knowing the real selection would be made on the final Cat One climb to the top of the mountain at Ciao Young Temple.

The 27-year-old Spaniard watched while Sky’s David Lopez made a strong attack on that final climb, waited while Garmin-Sharp’s Dan Martin caught it, and sat back while team mate Rui Costa attacked, again drawing a response from Martin.

Then, with 2000 meters left in the ever-steepening climb, Intxausti made his move, quickly gapping the twenty remaining riders in the lead group.

Lopez, Costa, Martin, and Ag2R’s Roma Bardet all chased, but only Martin had the legs left to really challenge. The Garmin rider drew to within a couple bike lengths thirty meters from the line, but just couldn’t close the gap. Intxausti crossed the line three seconds ahead.

“I am really happy—this is my first win since the Giro, because the Vuelta didn’t go really well. I am now ending the season very well,” Intxausti told tourofbeijing.com.

“I am dedicating this victory to Xavi Tondo. He is a very special person to me,” Intxausti continued. Tondo was killed when his garage door fell on him before a 2011 training ride with Intxausti.

Intxausti and recently crowend World Chapion Ruyi Costa had planned to be together at the finish, so the strongest rider could attack, Intxausti explained.

“Yes at the start of the day the plan was for Rui Costa and for me, so we had both options. In the last two kilometers, I tried to attack so that I could win the stage. Also, we worked hard to take the bonifications (time bonuses,) because they were also important.

“It was a very close finish; I could see Daniel Martin was very close to me. I went full gas to the end so I could raise my hands with enough time.”

The win was Intxausti’s first of aWorldTour level stage, and because of those precious time bonuses, the Spanish rider is almost certain to win the General Classification when the race reaches Beijing on Tuesday.

Intxuasti leads Dan Martin by ten seconds in GC, and is 13 seconds ahead of Sky’s David Lopez. With the final stage being a dozen laps around a pan-flat course around Beijing, there is virtually no way Intxausti can lose his lead.