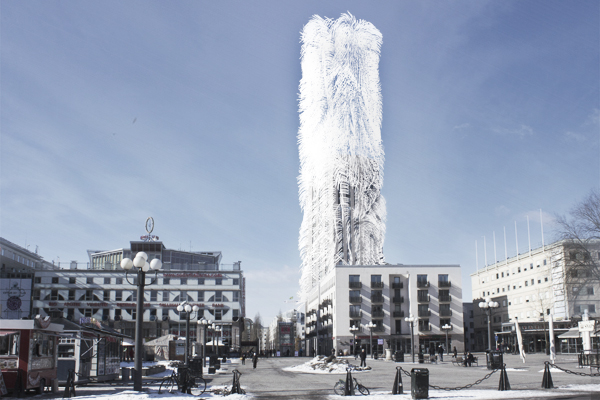 Covering of plastic 'hairs' could power buildings in light wind, according to architects
By Simon Veazey

Architects are hoping to turn one of Stockholm’s tallest buildings into the world’s first ‘strawscaper’.

The building would be powered completely by plastic ‘hairs’ covering the building from top to bottom, generating electricity as they are ruffled by the wind.

Belatchew Arkitekter, the firm behind the design said that even a light wind would be enough to power the building. They also emphasized the unique visual aspect of the ‘straw’ covered building.

“What is usually considered to be the most static of all things, the building, suddenly comes alive and the construction gives the impression of a body that is breathing,” says a statement on the architect’s website.

“The straws swaying in the wind give the building a constantly changing façade further reinforced at nighttime with lighting in changing colours.”

The architects propose to make the changes to the South Tower on Södermalm in central Stockholm, one of the city’s tallest buildings.

The building is already famed for architectural controversy, with architect Henning Larsen pulling out when his original 40-storey vision was overruled and the tower truncated to 24 floors.

The redesign includes not only the hairy plastic coat, but also the restructuring of the building to the height of its original design.

The plastic straws contain crystals which create electricity when they are deformed through flexing – a technology known as piezoelectricity.

“The technique has advantages when compared to traditional wind turbines since it is quiet and does not disturb wildlife,” according to the architects. “Using this technique, surfaces on both existing and new buildings can turned into energy producing units.”