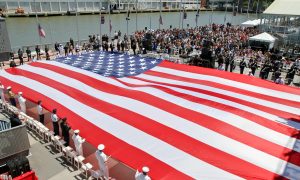 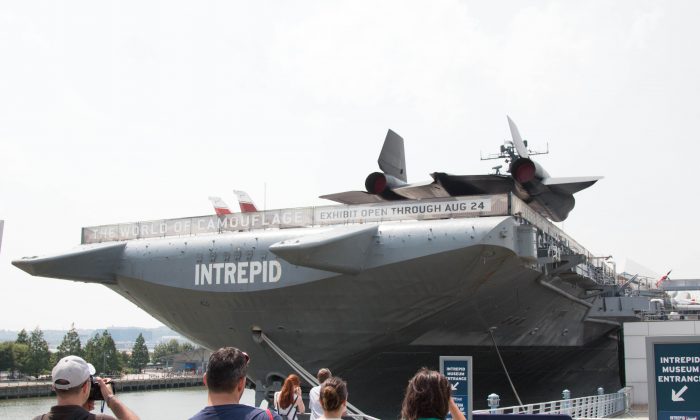 The decommissioned USS Intrepid featured at the Intrepid Sea, Air & Space Museum was the site of a transformer malfunction that left three people injured, Manhattan, on July 8, 2014. (Brendon Fallon/Epoch Times)
Crime and Incidents

A transformer malfunction aboard the Intrepid Sea, Air & Space Museum on Tuesday morning injured three, according to officials. A Fire Department spokesperson said firefighters responded to a call just after 11 a.m., and that earlier reports of an explosion were wrong.

A spokeswoman for the aircraft carrier-turned-museum said one victim was a museum employee and another was a volunteer. She said they were working to repair an outside power supply at the end of the pier. Two of those injured refused medical attention and a third was transported to Cornell Medical Center with burns, but officials could not comment on his condition.

The museum was closed for the day after the incident, and staffers handed out 50 percent discount cards for admission on Thursday.

One employee, who declined to give her name, said as she was leaving that she had heard that there was an electrical accident and didn’t see any smoke. She added that though staff members were told everything was alright, the power went on and off frequently after the incident.