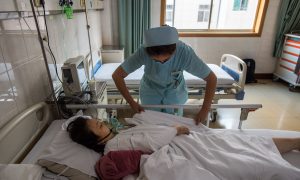 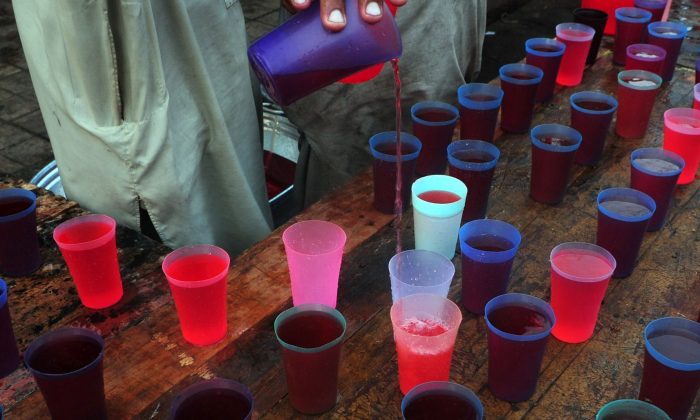 A woman nearly died after she hooked herself up to a homemade intravenous drip of fruit juice for intended health benefits. Many of her internal organs were damaged and she had to be rescued at a hospital, according to a March 17 report from the Xiaoxiang Morning Herald.

The woman, family name Zeng, was admitted to the intensive care unit at a local university, in Hunan province, China. Zeng, now 51, became focused on living a healthy lifestyle in recent years. It was reported that if she heard that something was healthy, she would immediately try it.

On Feb. 22, Zeng had the idea to make a juice from 20 different fruits. She filtered the juice, and then poured it into an intravenous drip-bag. She then inserted a needle and let the juice slowly drip into her bloodstream.

After the drip was finished, she felt her skin was itchy and temperature was high. However, she acted as if nothing was out of the norm.

Her husband asked her several times if she was alright, having sensed that something was not quite right with Zeng. She eventually told him about her fruit juice IV.

Her husband was scared to death and immediately took her to the hospital. Since her condition was complex and never seen before, she was transferred to a university hospital to receive more advanced treatment.

In the early hours of Feb. 23, an ICU doctor said that Zeng’s whole body had been affected. Her body’s ability to clot blood was blocked. Her heart, liver, and kidneys had all suffered varying levels of damage. Since her organs were out of normal function, she was diagnosed with sepsis.

Had Zeng not received treatment, she may have experienced hemorrhaging, organ failure, and septic shock.

Zeng had to undergo hemopurification to clear out her blood stream. She was also given treatment to assist with blood clotting. Further treatments were done for her heart and liver, which all together, allowed her to make a full recovery.

“I had thought that fresh fruit juice had plentiful health benefits,” Zeng told the Morning Herald with regret. “If it goes into the body, there are only benefits and no harm. How could I have known it would have brought such a crisis?”

The doctor mentioned that injecting things at random into the bloodstream can cause serious liver and kidney damage, enough to be life threatening.

For years, treatment of choice in Chinese hospitals has been an IV drip. Many mainland Chinese have come to regard this as the standard for general medical treatment.

A 2012 report from the World Health Organization (WHO) confirmed this belief. “The prevailing belief in China is that IV fluid gets to the source of illness and disease more quickly,” the report said. “As a result, a forest of IV fluid stands can be seen in many hospitals and community health centres.”

A Chinese report in 2009 revealed that 10.4 billion bottles of IV fluid had been consumed that year, according to the WHO. At that time, the figure represented roughly eight bottles of IV fluid per person over the year. The national average had previously been around 3 bottles per year.

Generally, the IV drips are to administer antibiotics. Chinese health officials urged people to use less IV drips in 2009. However, a student reported in the medical journal The Lancet in 2015 that 70 percent of Chinese hospital inpatients had been receiving antibiotic IV drips.

CGTN, the English version of the Chinese state-funded CCTV, suggested in a 2017 report that this IV craze was beginning to gain attention in the United States. According to the report, some individuals had reportedly been receive IV drips on a daily basis, for vitamins and fatigue alike.

In another report, a man in Kansas recently died three days after receiving an IV vitamin infusion at a wellness spa. According to The Kansas City Star, the unidentified 64-year-old started feeling the same itchy skin sensation 10 minutes after receiving the infusion, after which he started throwing up. At home, his fever spiked to 103 degrees Fahrenheit and the next morning, he was admitted to hospital with symptoms of organ failure.