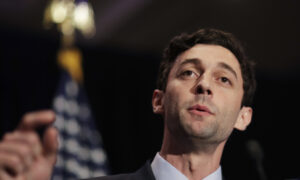 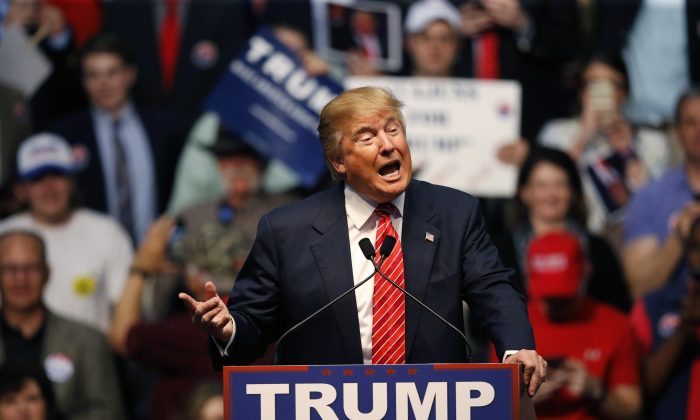 In this photo taken Feb. 11, 2016, Republican presidential candidate Donald Trump speaks at a campaign rally in Baton Rouge, La. Eyebrows shot up when Sarah Palin used a salty acronym, WTF, to mock the policies of President Barack Obama in 2011. How quaint. Five years later, Trump has blown right past acronyms in a profanity-laced campaign for the Republican nomination that has seen multiple candidates hurl insults and disparaging remarks at one another and their critics. (AP Photo/Gerald Herbert)
US

Into The Mosh Pit: Republican Campaign Talk Gets Nastier

Five years later, Donald Trump has blown right past acronyms. He’s in a profanity-laced campaign for the Republican nomination that has seen multiple candidates hurl insults and disparaging remarks at one another and their critics.

In recent days, Trump has publicly lip-synced the F-bomb, blurted out the S-word more than once, hurled an offensive term for coward at rival Ted Cruz and fired a steady string of put-downs at other candidates whom he labels pathetic, liars, losers, nasty, evil and more.

While Trump started it, other GOP candidates have jumped right into the rhetorical mosh pit, readily trading versions of “liar, liar” in Saturday night’s venomous debate.

Cruz has said Trump is “losing it,” called out his “Trumpertantrums” and dismissed the billionaire’s insults as “hysterical.”

Before exiting the race, New Jersey Gov. Chris Christie predicted that he could beat Hillary Clinton in a debate, promising, “I’ll beat her rear end on that stage,” and tormented fellow Republican Marco Rubio as a fragile “boy in the bubble.”

Even Jeb Bush, whose 90-year-old mother recently complained that he was too polite, belatedly joined in.

Bush, a favorite target of Trump’s taunts, tweeted back: “You aren’t just a loser, you are a liar and a whiner.” This, after weeks of calling him a “jerk.”

It’s not that politicians are typically paragons of proper speech and etiquette. They’ve just tended to keep their name-calling and coarseness off-mic.

Now, it’s on the podium — and by design.

“There’s a general taboo-breaking that allows more and more of it to happen faster and faster,” says Robert Lane Greene, author of “You Are What You Speak,” a book about the politics of language. “The first time somebody does it, eyebrows go up and people get concerned, but then the next person doing it is less eye-opening.”

The Democratic nomination contest has been tame in comparison with the Republicans: Hillary Clinton complained of a “low blow” when Bernie Sanders said she was a progressive only on “some days.” Sanders, in turn, rejected Clinton’s accusation that his campaign had engaged in an “artful smear” by insinuating that she was beholden to Wall Street.

As for the GOP campaign, Greene sees the coarseness of the GOP campaign as evidence that “the contest to become the alpha male in the room has become more obvious this time than in previous elections.”

That seems to be just fine with the voters who have put Trump at the top of the polls and handed him a victory in New Hampshire’s first-in-the-nation primary.

About a quarter of Republican voters in New Hampshire said “telling it like it is” was the most important quality to them in selecting a candidate, and two-thirds of those voters went for the potty-mouth guy who tells it like no one else.

“He’s real, right?” said Joanne Galvin, an independent voter from Pelham, New Hampshire, explaining her vote for Trump. She dismissed his use of a vulgarity about Cruz at a big rally by saying Trump was simply repeating what someone in the audience had shouted out.

Trump has offered a similar defense and promised he’ll tone things down if he gets closer to the presidency, saying, “when you’re president, or if you’re about to be president, you would act differently.”

Asked during Saturday’s debate about his penchant for profanity, Trump pledged to knock it off, saying, “I will not do it again … Not using profanity is very easy.” But he also made clear he has no intention of reining in his personal attacks and insults.

A super PAC supporting Bush is hoping Trump’s language is a turnoff to South Carolina voters. It’s running a radio ad in the state that strings together clips of Trump’s expletive-deleted language and then asks, “Is this the type of man we want our children exposed to? The time is now for South Carolina to end the Trump charade.”

Trump frames his blunt language as a harmless rejoinder to political correctness run amok, telling one TV interviewer, “Every once in a while you can have a little fun, don’t you think?”

But Kathleen Hall Jamieson, director of the Annenberg Public Policy Center at the University of Pennsylvania and an expert on political communication, said Trump has “hijacked” political correctness to justify his routine use of personal attacks. That’s causing other candidates to mirror his tactics and creates a worrisome diversion from a needed discussion of ideas, she said.

Harking back to 1988, she recalled when Republican presidential contender Bob Dole stepped over a line when he snapped at GOP primary rival George Bush to “stop lying about my record.”

Until then, she said, “candidates did not use the word ‘lie’ about each other.”

It’s all part of a broader trend toward informality in politics that has been going on for more than a century, says Greene.

Many Americans are drawn to Trump, Greene says, because he talks like “the guy next to them on the bar stool.”

“Some people find the guy next to you on the barstool obnoxious, but a lot of Americans ARE that guy.”