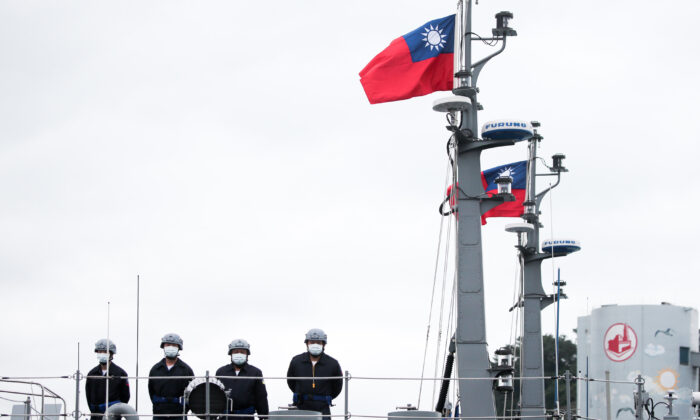 Soldiers stand onboard a Taiwan Navy minelayer in Keelung, Taiwan, on Jan. 7, 2022. Taiwan is bracing for more Chinese military patrols this year, after People's Liberation Army incursions more than doubled in 2021, fueling concern about a clash between the region's big powers. (I-Hwa Cheng/Bloomberg via Getty Images)
Thinking About China

Intimidation and Confusion on the Taiwan Strait

By repeatedly stating in public he will defend Taiwan, only to have his commitment “walked back” by White House spokespersons, is President Joe Biden trying to intimidate China, only to cause confusion about the real determination of American defense commitments in Asia?

During a CNN television “Town Hall” on Oct. 21, 2021, and at a press conference in South Korea on May 23, 2022, Biden was asked whether the United States would defend Taiwan. He responded with a simple “yes.”

In both cases, unnamed administration spokespersons would “walk back” Biden’s explicit defense commitment to a country not officially recognized by the United States. On May 23, this spokesman gave an “explanation.”

So while Biden makes apparent explicit commitments to defend Taiwan, a defensible change of the long outdated “ambiguous” U.S. policy regarding this very question, the U.S. foreign policy bureaucracy is only willing to publicly commit to selling weapons to Taiwan, a main commitment made in the 1979 Taiwan Relations Act.

There is no ambiguity regarding the Chinese Communist Party’s (CCP) and the People’s Liberation Army’s (PLA) goals for the self-ruled island democracy—the CCP wants to end Taiwan’s freedom and turn it into a military base.

Since 2015, the CCP/PLA has waged a “war” of military intimidation, using real weapons to scare Taiwan, the United States, and Japan from defending freedom on the Taiwan Strait.

Up to about 2019, it was disturbing that PLA Air Force (PLAAF) H-6K bombers and supporting combat aircraft would occasionally violate Taiwan’s air defense identification zone (ADIZ). But from early 2020 onward, these flights have become near daily events, supplemented with occasional threatening PLA Navy (PLAN) moves near Taiwan.

A high point was from Oct. 1 to 4, 2021, when a total of 145 aircraft violated Taiwan’s ADIZ, including 16 sorties by H-6K bombers that can carry up to six 1,000-mile range CJ-20 nuclear or non-nuclear armed land attack cruise missiles; and 96 sorties by J-16 twin-engine large strike fighters.

However, CCP/PLA intimidation reached a new stage on May 2–21, when eight PLAN ships, constituting a battle group centered on the 60,000-ton aircraft carrier Liaoning (CV-16), sailed south through the Miyako Strait to exercise in an area about 300 miles east of Taiwan, and then returned through Miyako.

While coordination between a carrier battle group to the east of Taiwan and land-based strike aircraft provided vital practice for imposing a blockade against Taiwan and blocking U.S. Navy and Air Forces that might come to assist Taiwan, the PLA could escalate its intimidation of Taiwan even further.

Following its firing of ballistic missiles in a failed attempt to intimidate Taiwan in 1995 and 1996, the PLA could add new land-launched or air-launched ASBMs to future combined air and carrier group exercises near Taiwan.

An even more threatening level of the PLA’s intimidation of Taiwan could feature combined air-sea-missile force exercises, which could include the conduct of an atmospheric tactical nuclear explosion, signaling the CCP’s ultimate threat of using such nuclear weapons against the U.S. and Japanese forces that could help defend Taiwan.

But that’s not all. As Biden departed Asia on May 24, the PLAAF and the Russian Air Force held their first bomber exercise since Russia’s invasion of Ukraine, with four H-6K and two Tu-95MS bombers flying over the Sea of Japan and through the Miyako Strait, a reminder that Russia is part of China’s intimidation and potential military campaigns against Taiwan.

However, while all of these operations would be part of a PLA naval and air blockade of Taiwan, years of intimidation exercises against Taiwan do not represent how the PLA may start its campaign against Taiwan—even though the PLA likely hopes to deceive the United States, Taiwan, and Japan otherwise.

Instead of surging easy to target large aircraft carrier battle groups and large formations of bomber and strike aircraft, the early “kinetic” PLA operations will likely stress large surges of cruise missile-armed nuclear powered and conventional submarines, while 125 or more H-6K/J/N bombers, in just three sorties each, could fire over 2,200 cruise missiles at Taiwan from well-defended areas over China.

Once concentrations of missile strikes take out major radar and anti-aircraft missile defenses, then larger air strikes by tactical fighters will prepare the way for sea-air invasion forces and the imposition of naval-air blockades.

But there is now a new problem: as the PLA demonstrates its ability to impose a blockade on Taiwan, the Biden administration is trying to use denial of some arms sales to force Taiwan to adopt an “asymmetric” strategy or to purchase weapons to best defeat a “D-Day” invasion by the PLA, while disapproving the sale of weapons that could strike the PLA at a longer distance.

This new arms sales policy or emphasis was revealed by the Virginia-based U.S.-Taiwan Business Council in a May 16 letter responding to a March 14 meeting with Mira Resnick, deputy assistant secretary in the State Department’s Bureau of Political-Military Affairs.

The letter stated, “The apparent sole focus of this new arms sales policy is to address an all-out D-Day style invasion of Taiwan.”

The Biden administration apparently has canceled Taiwan’s longstanding attempt to purchase the MH-60R anti-submarine warfare helicopter, which would arm some Taiwan Navy frigates, as they do not “address an all-out D-Day style invasion.”

A weakness of this debate, long pointed out by Taiwan officials and academics, is that Taiwan does not have the luxury of just focusing on the “close” battle, as failing to defeat or damage the PLA at a “distance” only helps increase the certainty that the PLA’s invasion forces will reach Taiwan.

But the United States could easily sell Taiwan an “asymmetric” weapon that could defeat the PLA’s blockade and invasion forces. It can accelerate the Trump administration’s decisions in 2020 to sell Taiwan 400 80-mile range Harpoon anti-ship cruise missiles, and 66 of the 186-mile range ATACMS tactical ballistic missile, and sell the soon to be deployed Precision Strike Missile (PrSM), a potential 500-mile range ballistic missile that will be armed with an anti-ship seeking warhead.

As it is intended to be a half-a-million dollar missile that could sink a multi-billion dollar aircraft carrier, PrSM fits the definition of an “asymmetric” weapon. Also, by posing a clear threat to PLA blockade and invasion forces, the PrSM would go far to force the PLA to decide against an invasion, thus deterring Chinese aggression on the Taiwan Strait.

Even though Biden is becoming less ambiguous about the U.S. commitment to Taiwan’s defense, it would be far better to massively arm Taiwan to deter a CCP decision to start a war.