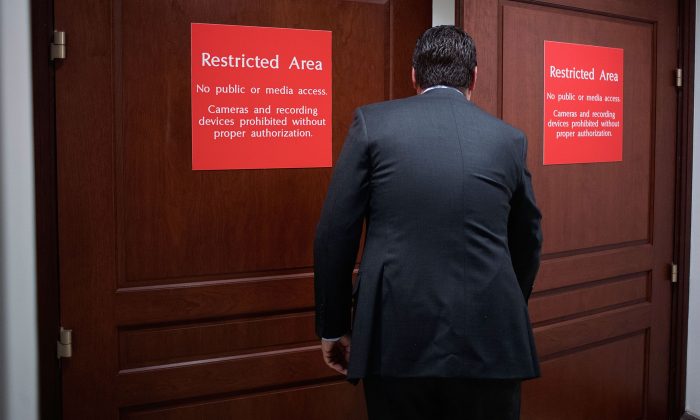 Interview With FBI’s Gaeta, Central to Russiagate, Among 53 Transcripts Slated for Release

The House Intelligence Committee voted on Sept. 28 to release the transcripts of 53 interviews conducted during the committee’s investigation of Russian interference during the 2016 presidential election.

While the public has heard the story of many of the interviewees before, one of the transcripts may be the most complete account yet from a key figure in what has come to be known as “Russiagate.” Specifically, his role in allowing the now infamous Steele dossier to become the cornerstone in the FBI obtaining a FISA spy warrant on Trump campaign adviser Carter Page, and by extension—under the NSA’s so-called two-hop rule—other members of the Trump campaign. That figure is FBI agent Michael Gaeta.

Gaeta was, and possibly still is, the assistant legal attaché at the United States Embassy in Rome. Until 2014, he headed the FBI Eurasian Organized Crime unit.

It was Gaeta who, reportedly on July 5, 2016, traveled to London to meet with former British spy Christopher Steele, the author of the dossier. The trip was reportedly authorized by Victoria Nuland, then-assistant state secretary for Eurasian affairs.

Steele used unsubstantiated claims from second- and thirdhand sources close to Kremlin to compile the dossier on Russians allegedly conspiring with the Trump campaign to sway the elections.

Steele was paid by opposition research firm Fusion GPS, which was paid by law firm Perkins Coie, which was contracted for the job by the Hillary Clinton campaign and the Democratic National Committee (DNC).

Steele was only authorized by Fusion GPS co-founder Glen Simpson to call Gaeta a few days before the July 5 trip, according to Yahoo News’ Michael Isikoff and Mother Jones’ David Corn.

But that doesn’t square with a report by The Guardian’s Luke Harding, who wrote that Steele flew to Rome in June to brief on the dossier his “FBI contact with whom he had co-operated over Fifa.”

Harding wrote that Steele had previously provided the FBI with information on Russians corrupting the Fifa soccer association in a bid to host the 2018 soccer World Cup.

Steele’s “American contact in Rome” was “the head of the FBI’s Eurasian serious crime division,” Harding wrote. That was, at the time, Gaeta.

Nuland later testified to Congress that she saw “excerpts” from the unfinished dossier in mid-July 2016. She decided the matter should have been handled by the FBI, she said during her appearance on CBS News’ “Face the Nation.”

But it wasn’t the dossier that, officially on July 31, 2016, prompted the FBI to launch a counterintelligence investigation of a Russian conspiracy, even though the conspiracy was primarily alleged by the dossier.

All Roads Lead to Rome

As the official story goes, Trump campaign advisor George Papadopoulos was invited for a talk with then-Australian ambassador Alexander Downer and the two met and drank in London on May 10, 2016. Downer later said he learned from the young aide that Russians had information that was damaging to Clinton.

Downer reported the conversation to Canberra “a day or two after,” as “it seemed quite interesting,” he told The Australian.

When, on July 22, 2016, Wikileaks started to release emails they say were leaked from the DNC, the Australian government communicated to the FBI what Downer learned from Papadopoulos.

Since Crowdstrike, a firm hired by the DNC, provided data that suggested the DNC emails were hacked by Russians, the FBI appears to had made an inference that the Clinton dirt was the DNC emails and that Papadopoulos, therefore, must have had prior knowledge of the alleged Russian hacking. That was enough to launch the probe.

What’s not clear, however, is how the FBI reached its conclusion. Rumors about Russians having something on Clinton, specifically her government emails, which she kept on a private, poorly secured server, was public knowledge by May 10, 2016. In fact, just the night before, on May 9, former judge Andrew Napolitano aired the rumor on Fox News saying “there’s a debate going on in the Kremlin” on whether they should release 20,000 Clinton emails the Russians hacked.

The FBI concluded that Clinton’s email wasn’t hacked. The alleged 20,000 emails were supposed to come from the account of Clinton’s aide Sidney Blumenthal, whose email, the FBI acknowledged, was hosted on the Clinton server and was compromised.

But it’s not clear how the FBI could be sure that Papadopoulos wasn’t just drunkenly repeating to Downer what he may have heard on Fox the night before.

One possibility is that the FBI knew Papadopoulos had the information from a different source, which is true.

On April 26, 2016, in London, Papadopoulos was told by Maltese academic Joseph Mifsud that Russians had thousands of Clinton emails. Mifsud presented himself to Papadopoulos as a person with deep ties to Russia, but that was mostly a sham. There’s no sign that Mifsud’s real contacts with the Russian government went beyond Ivan Timofeev, an academic working for a think tank run by the Russian Foreign Ministry.

As a veteran professional of his stature, Gaeta must have been familiar with Link, which is headed by former Italian interior minister Vincenzo Scotti. Gaeta’s colleague from the embassy in Rome, FBI Special Agent Preston Ackerman, even gave a presentation at Link in September 2016, according to UK political analyst Chris Blackburn, who backed up the claim with a screen shot of a Sept. 9, 2016, Facebook post about the presentation, which appears to show Ackerman as the author of the presentation.

That same September, Steele went to Rome again and briefed an FBI team there on his updated dossier, The Guardian reported. It’s not clear whether Gaeta was present, though it was likely as he was Steele’s main contact.

It is clear, however, that the FBI heavily relied on unsubstantiated allegations from the dossier about Page to obtain a FISA spying warrant. Based on the heavily redacted version of the warrant, the FBI failed to disclose to the FISA court that the dossier was paid for by the Democrats. The warrant also used Isikoff’s article without disclosing that the article used Steele, the dossier’s author, as its source.

Trump has recently asked the Justice Department’s Inspector General to vet for declassification key parts of the warrant and other documents that may shed more light on the extent to which the dossier was used to spy on the Trump campaign.

A number of questions remain about Gaeta’s involvement with the dossier and the Russia investigation: What exactly did he do with the initial information from Steele in June 2016? How often was he in contact with Steele? Did he know Mifsud? The House Intelligence Committee interviewed Gaeta on Dec. 20, 2017. Around the same time, Mifsud disappeared and hasn’t been heard from since. One of his associates said that Link’s Scotti told Mifsud to lay low.

Now that Gaeta’s interview is slated for release, the public may finally get a clearer picture. The transcripts are still subject to redactions, though, presenting a danger that instead of Gaeta’s testimony, Americans will be treated to pages of impenetrable black ink.

Update: The article was updated with a more detailed explanation by Chris Blackburn regarding the evidence of FBI Special Agent Preston Ackerman’s presentation at Link Campus University in September 2016.