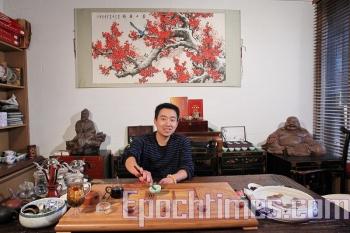 Xia Muozhu
View profile
Follow
biggersmaller
Print
Tea is the national drink of China, and Xishuangbanna, in southwestern China's Yunnan Province, is the home of Pu-erh tea. Born in Menghai County, of Xishuangbanna Prefecture, 28-year-old Danny won the title of national first-class senior tea taster. Through his love of traditional Chinese tea and unremitting dedication to the art of tea tasting, he became the youngest senior tea taster. He recently opened a teahouse called Healthy Link a year after moving to Melbourne, Australia, from China. I interviewed Danny at his peaceful, little teahouse. He first made a pot of Pu-erh tea that warmed my stomach.

While Danny warmed up the tea set, cast and washed tea leaves, he introduced me to the first cup of tea we would be having: “This is a small bay of pressed Pu-erh tea that’s about 15 years old. Although the tea was cooked tea and was in storage for quite a long time, the taste is very smooth and thick.

“The color of the tea looks like red wine and is very good. If you drink carefully, you’ll notice that each refill is different in taste. It is very strong, thick, heavy, and smooth. Pu-erh tea is good for your health and has a mellow aftertaste.”

The first sip tasted strong and mellow, just like a sincere friendship.

Danny’s family has been in the tea-making business for four generations. When talking about himself, his tone is humble: “I was raised around drinking Pu-erh tea. When I was 3 years old, my family gave me Pu-erh to drink. I also often drank gong-fu tea with my family.

“When we hosted guests, I also wanted a cup of tea. I still remember drinking small cups of tea, cup after cup,” he said. “Now I have a lot of friends here. They show me their tea they brought from China or from their friends.

“My plan is to pass the traditional Chinese tea culture to future generations and let more people know about it. A good tea must be good for your health and must taste good. I want more people to drink genuine and good tea. Knowledge of traditional tea culture will benefit today’s people.

“Now, I drink, chat, and evaluate tea with friends every day. I feel very comfortable and content. I have all kinds of traditional Chinese tea at my teahouse. This is my only store in Melbourne,” he said with a smile.

The owner of a local Mercedes dealership, a Westerner, came into Danny’s teahouse during our interview. He said he fell in love with Chinese tea after drinking a pot of tea at Danny’s teahouse. He drank all kinds of tea before, but now he says he only drinks traditional Chinese tea. He ordered tea right away and said, “What I value most is the quality of a product, and what I want is tea like this.”

According to Danny, although Pu-erh tea does not taste as savory as tea treated with a flavoring essence—it is still quite bitter and astringent at the beginning—later there is a sweet aftertaste. People gradually learn to appreciate it because they have realized it is good for their health.

“In Australia, many young people who prioritize taste and fad may prefer coffee to tea at first, but eventually they will choose tea after they realize the importance of health,” he said. “Many people who have good taste like to drink tea. More and more people in the future will choose to drink tea.”

Danny has been in the tea-tasting profession for eight years. He said: “As a tea taster, you need to taste both the good tea and the bad tea. You should be patient in learning about tea since there are several hundred kinds. You need to be serious in learning about each kind and taste carefully.

“You also need a good, sensitive tongue. I have many friends, and they bring their own tea to share. We compare, evaluate, and discuss the tea and in doing so, we learn a lot.”

He said that a tea taster should not be prejudiced by first impressions. “First of all, you should have a peaceful and fair state of mind. You must put behind all external factors and only focus on the tea. You should follow the procedures of tasting. This is a very important point.”

“I had a guest who lives in Hong Kong, and we met each other in Beijing. I gave him a call one day and told him that I had a pot of very aged tea and planned to share it with my friends. He was very busy in Hong Kong, but he booked a flight the next day. He came to Beijing just to have a cup of that tea.

“I was very moved at the time. We are now good friends. I believe that with tea, you can really have a deep friendship,” Danny said with a tinge of emotion.

Danny’s online store can be found at www.healthylinktea.com.

Next: Part 2, on drinking tea the wrong way and characteristics of Pu-Erh tea.