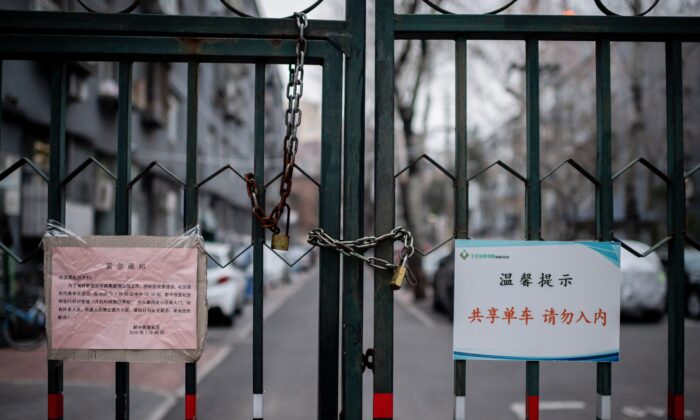 A gate of a residential area is locked up as a preventive measure against the COVID-19 coronavirus in Beijing on Feb. 24, 2020. (Nicolas Asfouri/AFP via Getty Images)
By Angela Bright

Despite efforts by top communist officials to protect Beijing from the novel coronavirus outbreak at all costs, COVID-19 is rapidly spreading throughout the city, and a number of hospitals located in the Xicheng District are treating people who have become infected through person-to-person transmission. The Xicheng District is home to the Zhongnanhai compound that houses the offices of top Chinese Communist Party (CCP) officials.

The director of internal medicine at a hospital in Beijing, using the alias Hou Yong, said that it’s the corruption and incompetence of the CCP that has led to the outbreak of the disease, and medical staff sent to Wuhan by the CCP are being used as cannon fodder. He also revealed that recent confirmed cases in a local hospital are “very serious.”

At a Feb. 20 press conference on coronavirus prevention and control in Beijing, Li Dongxia, president of Fuxing Hospital, announced that 34 infected patients had been confirmed at Fuxing Hospital as of 6 a.m., that day.

U.S.-based Chinese media outlet Secret China contacted doctors at several Beijing hospitals on Feb. 22 to obtain on the ground information about the spreading virus. Most of the doctors did not want to talk about the outbreak and expressed fear of the consequences of being interviewed. Hong Nan, a radiologist at Peking University People’s Hospital, responsible for identifying suspected cases based on CT scans, also declined to disclose information about the number of cases in his hospital. He merely said: “You must be aware of the situation in China regarding disclosing coronavirus cases to the public. I certainly can’t tell you the exact number.”

Hou Yong, director of internal medicine at another Beijing hospital, agreed to an interview with Secret China on condition of anonymity.

Hou revealed that, although Beijing has announced more than 300 confirmed cases, previously most of the transmissions happened in the community, person-to-person.

“However, the most recent case from Peking University’s People’s Hospital is a big issue,” Hou said. “Although only three patients have been confirmed [at this hospital] so far, more than 140 patients who recently visited the dialysis department are now quarantined, because one of the three confirmed patients is a frequent visitor to the department. Anyone who came into contact with these 140 plus patients or their families in the past two weeks could have been infected, so the impact could be very big,” he said.

Hou also said that all doctors in Beijing are basically required to remain in Beijing and be prepared and on call at all times.

“All of us were required to return to work on Jan. 31, the seventh day of the Chinese New Year, which is usually still holiday time. Anyone who didn’t return would be dismissed, with no exceptions,” he added.

Doctors from Other Provinces Sent to Wuhan

“The whole Wuhan bureaucracy is among the worst in China,” Hou said. “When doctors went there, they had to bring their own personal [safety] gear, and food, because nothing is provided to outside medical teams. Going to Wuhan is like an invitation to one’s doom. Some doctors and nurses from our hospital went there. They thought they would be there for two weeks, and now it has been almost a month. They are on the brink of total collapse.”

Hou said the entire city of Wuhan is like “hell on earth.”

“I knew it as soon as the Wuhan government announced the building of makeshift hospitals. When all [confirmed and unconfirmed] patients are kept together, they will infect each other. It violates the most basic principle of fighting infectious disease. They need to be quarantined.”

Central Government Has Abandoned the People in Wuhan

Despite the CCP’s obvious mismanagement of the epidemic, Hou said many Chinese people are still oblivious of the true situation.

“Most of my friends say, ‘Thanks to our government, we’ve got this outbreak under control.’ I tell them it’s precisely because of this corrupt government and these incompetent officials that this epidemic has spread like it has.”

“When the disease first started, and when it was reported sporadically and casually, I knew it was going to be a big outbreak, so I told my friends and colleagues to buy masks. Not everyone believed me. A couple of days later, all masks and disinfectants had been sold out. Now Wuhan is in a state of lockdown, as is the entire Hubei province. In essence, it means that the central government has abandoned people there, they are left to die on their own, especially those in the makeshift hospitals. Having thousands of people in close proximity with no quarantine measures is letting them die. In that environment, even healthy people will get infected. The authorities locked down the city and kept sending a lot of medical staff to Wuhan as cannon fodder.”

Ordering People Back to Work

Hou also spoke about the authorities’ order to have companies resume their normal work capacity.

“I asked a lot of people I know, ‘If you don’t work, how long can you last?’ Most of them said just one or two months. Even those who earn 6,000 yuan ($852) a month said they could only last a month or two, because they have a family to support, and they have no savings. These days, one percent of China’s population controls the majority of the country’s wealth, while the remaining 90 plus percent lead mediocre lives, so that’s the problem: if they don’t go back to work, they can’t survive,” Hou said.

But there’s a problem with going back to work at this point in time, Hou said.

“When resuming work, it’s difficult to avoid infection. Isn’t it true that the e-Commerce company China Dangdang had such an incident already? Even if only one employee is infected, all staff who came in contact with him need to be quarantined. That’s a really big problem for labor-intensive companies. Imagine if an employee at Foxconn were infected, what would happen next?”

“I heard that after March 1, China’s Internet may be cut off. If that were to happen, I won’t be able to say anything anymore,” Hou added. “It is said that China will build a big network project. That is, build a domestic root server and stop using the ones from the United States or other countries, turning all of China into a local area network (LAN). That’s the extent their control would be.”

Hou also mentioned the recent protests in Hong Kong, saying they are worthwhile and something for Chinese people to think about.

“When the movement in Hong Kong had lasted for six months, my social media friends split into two factions and argued bitterly,” he said.

“I asked them to think about this: Didn’t Hong Kongers know that their six-month-long protest would affect their daily lives, affect their work and school, and affect their economic situation? So why do they persist? It’s because they believe that there is something more important than their jobs, their lives, and their economic condition. What is it? I think everybody knows. Also, for such a long time, we haven’t heard of a single incidence of a police officer being killed from violent attacks by citizens. That’s something worth thinking about.”