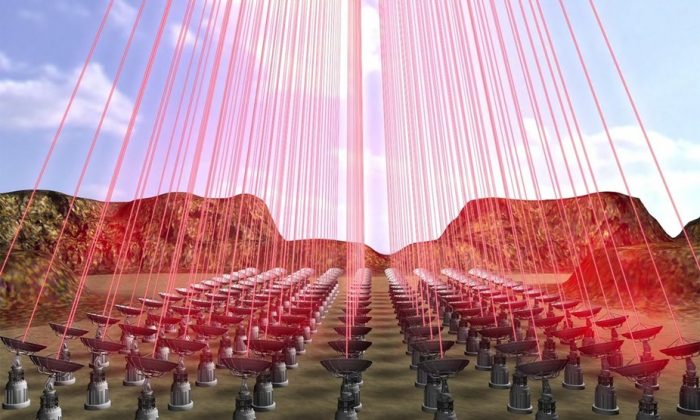 Every other Monday morning I get to chat on ABC Breakfast News TV and try to remember that not everyone at 7.30 a.m. is as excited about exploding stars or colliding galaxies as I am.

This week though I had no doubts that I wouldn’t be the only one excited as I discussed the incredibly ambitious Breakthrough Starshot mission to reach another star. Baby-boomers often remember where they were when they saw the incredible sight of humans walking on the Moon. But in my lifetime it may be possible to see something just as amazing: that of humanity exploring an alien solar system.

The mission is simple in concept yet enormously challenging in execution. To get to one of our closest stars, Alpha Centauri, in 20 years requires travelling at a fifth of the speed of light, 60 million meters per second.

To do this in a normal rocket, you would carry fuel to propel yourself through space. And to go quicker, you burn more fuel, but that extra fuel adds weight to the spaceship, meaning now you need extra fuel to propel that.

This quickly snowballs until the required fuel is enormous and high speed exploration of the solar system is challenging, the reaching nearest star is impossible. The wonderful flyby of Pluto by New Horizons took nearly a decade. That same craft would take tens of thousands of years to reach the nearest star.

The beautifully poetic idea of riding to the heavens on a beam of light is also a technically solid one, although possible is not the same as easy.

A new approach is required to reach the stars. Instead of taking the fuel with you, keep it behind on Earth as a beam of laser light that propels you onward as a light sail is pushed on the pressure or “wind” of this light.

It may sound poetic, but this is a solid technical idea and is in fact one signature of aliens that Breakthrough Listen from last year is trying to find. This time we are the ones producing laser beams that distance aliens may potentially see twinkling in their telescopes.

However even 100 gigawatts of lasers (as much power as Australia consumes at any one time) shining on one light sail for up to 10 minutes is only going to accelerate to a fifth the speed of light if the craft is lightweight.

To this end each star ship is tiny, a single gram in mass. Yet fitted out with camera, communications, electronics and even mini photon thrusters. Thanks to rapid miniaturization these are all possible to imagine fitting on a single Starchip in a decade or more.

Whether the lasers can be built, the beam focused on a tiny spot (no bigger than a DVD on the Moon) and the light sail pushed accurately enough to reach the target star, much less survive the journey through interstellar space remains to be seen.

Luckily, Breakthrough is backed by billionaires Yuri Milner and Facebook’s Mark Zuckerberg, as reaching the stars will take far more than the initial $100 million investment.

Zoom Into a Cluster

We may think our Milky Way galaxy is pretty big (it does stretch across the sky after all), yet on cosmic scales the largest structures have galaxies like ours as building blocks.

These are clusters of galaxies, or galaxy clusters, and can stretch across millions of light years. Entire galaxies whirl around the enormous gravitational potential of huge accumulations of X-ray hot gas and invisible dark matter.

The European Southern Observatory (ESO) has just released a beautiful view of one of the closest galaxy clusters to us, the Fornax cluster, taken with the VLT Survey Telescope.

The Fornax (or furnace) cluster in the Fornax constellation as seen by ESO’s VLT Survey Telescope.

Most noticeable is a (barred) spiral galaxy (NGC 1365) with elegant features that lies just off the center of this cluster. Closer to the center of this monstrous structure are train-wreck galaxies (NGC 1399 in particular) that have grown through intergalactic cannibalism. In the violence of consuming smaller galaxies they have lost all the fine structure of the spiral galaxy.

Don’t be mistaken though, the elegant spiral is just as extreme an object as the rest, containing an enormous supermassive black hole that is rapidly spinning and ejecting huge amounts of radiation.

NASA has a long and proud tradition of developing spin-off tech that benefits and enriches our lives. Yet surely the news that technology designed to capture carbon dioxide from Martian air has found a place in improving craft breweries is one of the great adaptations.

Until now, craft breweries had struggled to capture the small amounts of carbon dioxide released in the fermentation process and instead had to import it in later at great expense to purge tanks and add the “fizz” in beer.

Thanks to the CO2 Recovery System, these microbreweries can use NASA technology designed to efficiently capture carbon dioxide from the thin Martian air and automatically store it for later use.

This saves them money (payback time is two years for a brewery producing 60,000 barrels per annum) and prevents unnecessary carbon dioxide, a greenhouse gas, from being released into the air.

So more than one reason this week to raise a glass in toast.

Alan Duffy is a research fellow at Swinburne University of Technology in Australia. This article was originally published on The Conversation.