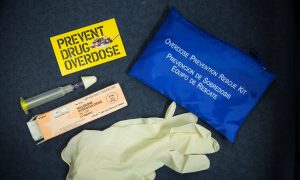 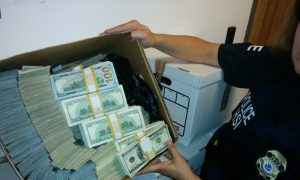 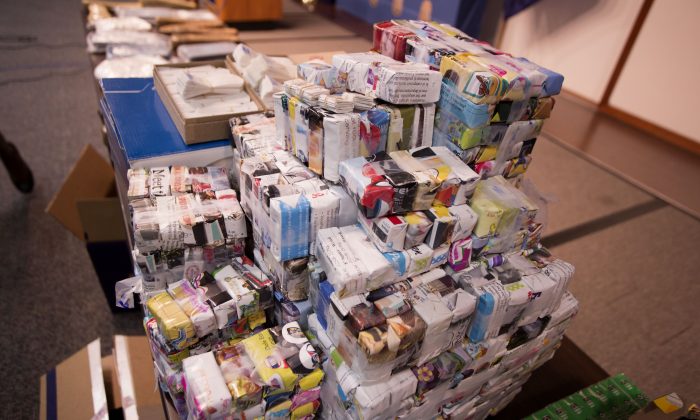 Hundreds of glassines, little envelopes of heroin ready for street-level distribution, were seized from a Bronx heroin mill and displayed in Manhattan, N.Y., on Oct. 1, 2014. Attorneys General from New York and Pennsylvania announced the creation of the Northeast and Mid-Atlantic Heroin Task Force to tackle the growing heroin distribution problem. (Laura Cooksey/Epoch Times)
New York

Weeks after a New York City drug bust announcement coinciding with stats that put 2014’s heroin seizures at a 25-year high, the state attorney general is launching an interstate initiative to stop trafficking.

What used to be considered an urban problem is now reaching every corner of the New England area, according to officials.

It should send a message to drug traffickers, Kane said in a press release, “You can’t hide by crossing state lines.”

“For too long, drug organizations have tried to outmaneuver law-enforcement agencies by crossing state lines,” Schneiderman stated in a press release. “This task force will ensure that our borders do not become our boundaries.”

“The drug dealers don’t stop at the state border, and with this partnership, neither will law enforcement,” Kane said. “By sharing intelligence and other resources, we are taking this war to them, not waiting for them to infiltrate our communities.”

New York and Pennsylvania will co-chair the effort, which includes law enforcement officers from New Jersey and Massachusetts as well.

According to the U.S. National Institute of Health, first-time heroin use has almost doubled since 2006, and the Northeast/Mid-Atlantic regions are dealing with the brunt of the problem.

New York City and Philadelphia are two of the biggest cities, with a combined population of 10 million people, and are “primary nodes for heroin trafficking” in the region according to Schneiderman’s office.

Additionally, over half the law enforcement agencies in the Northeast/Mid-Atlantic regions reported “high heroin availability” in 2013.

New Jersey recently declared a five-year high of 25,442 people seeking treatment for heroin abuse in 2012. Massachusetts declared a public emergency this spring after seeing a spike in overdoses of about 200 last year.

The task force will allow the various agencies to share information about specific subjects, distribution routes, locations, and so on.